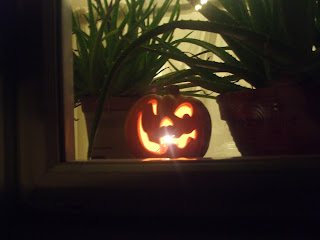 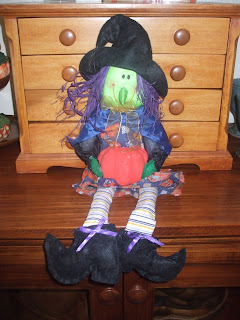 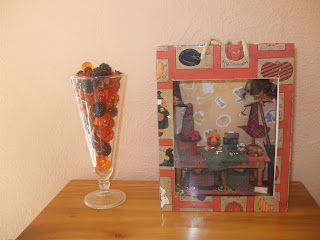 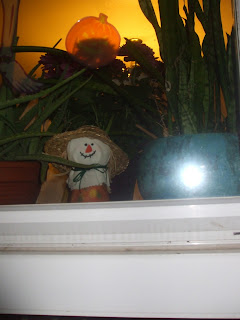 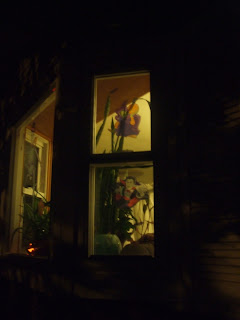 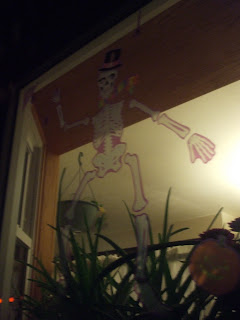 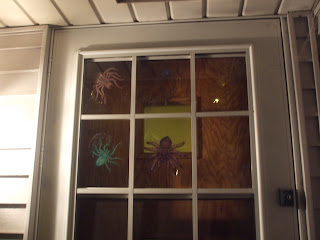 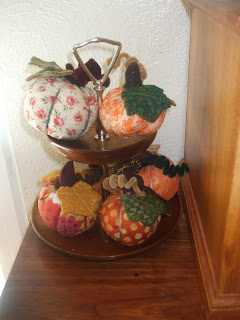 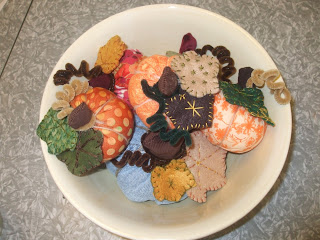 I finished a couple of related projects yesterday and today.  Everything in this post was donated to my Stitcher's Guild's annual Silent Auction.  The event is next Tuesday and I have my eye on a particular something.  If I get it I promise to post about it.
First up are some sewn pumpkins.  These will be divided up into three lots: the large one by itself and two lots of three little ones. 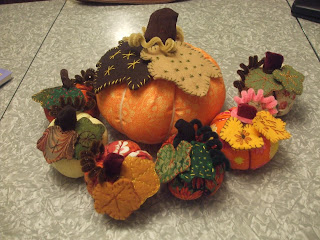 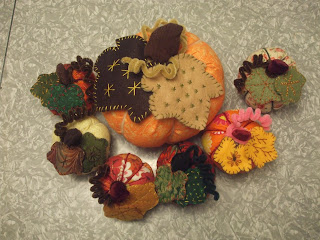 Poke the images for a better view of the embroidered leaves.  I had the most fun with the small pumpkin on the top left.  The fabric is green on green images of leaves and  such so I embroidered branches and berries onto it.
Next are two more crochet top towels, Halloween themed.  They're just like the ones I made before but I used different yard for the flowers. 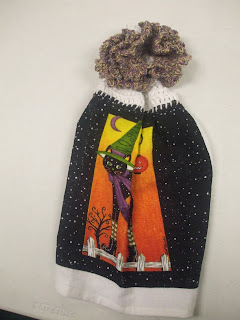 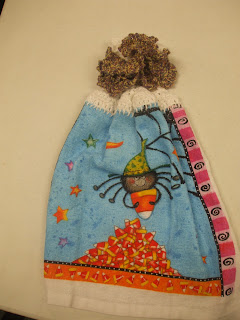 I'm going to have my hands full tomorrow helping a friend do some more renovation work in her home.  Catch you all later!
Posted by MiniKat at 7:26 PM 4 comments:

- Water heater safety controls died a horrid death (but nothing else was damaged) and we decided replacing it would be prudent.  Luckily the handyman was already here dealing with plumbing, which is how we figured out there was a problem.

- Castor's seizures are not under control.  We're playing with dosages again.

- I have a mystery fever.

I'm going to crawl into bed and hopefully I can function again in the morning.
Posted by MiniKat at 10:55 PM 2 comments:

And People Wonder Why I Don't Loose Weight

I just keep finding new ways to have it stick around.

Monday night I whipped up some Snickerdoodles to take to Guild, so of course some came back home with me. 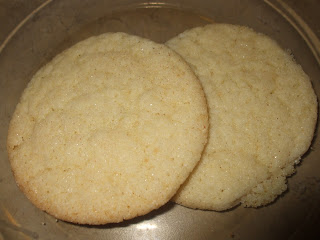 Today I tried out a recipe for blueberry-lemon scones. 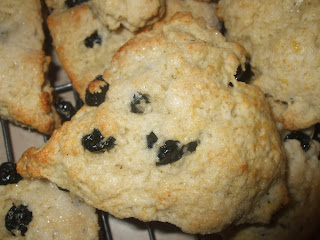 FH isn't much help either when he makes lovely dinners like this: 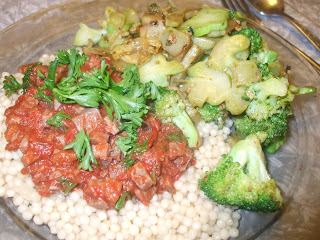 Moroccan beef over couscous with stir fried broccoli... it may sound healthy, but only if you can manage to control how much to eat.  ;-)
Posted by MiniKat at 5:04 PM 3 comments:

A friend of mine makes these awesome towels and was nice enough to show me how she does it.  Here's my first two attempts at using her design. 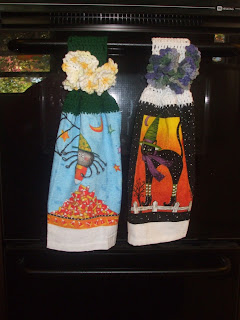 I like the flower in place of a button.  It's more girly and means you don't have to dig out stuff to sew on buttons.
I've got more towels in my stash for Thanksgiving, Yule, and even the 4th of July.  Hopefully I can find colors of crochet cotton that look ok with them.
Back to house-cleaning and other necessary things!
Posted by MiniKat at 7:55 PM 4 comments:

Painting - Before and After

Towards the end of last week I decided that the living room/dining room really needed painting before I bring my dining room set up from down south.  Especially since that room's paint had been sitting in the way since early March.  Here's a look at the former wall color, with some of my autumn/Halloween decor for contrast. 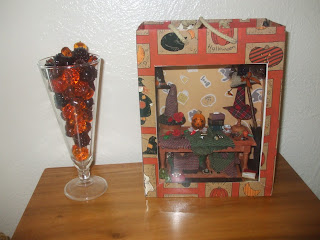 Now here's the same view with the new paint on the walls. 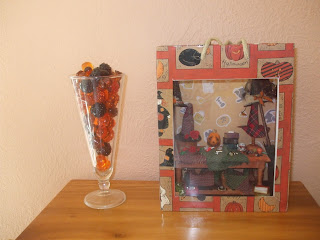 I love love LOVE the new color!  And as an aside, don't Kat's hats look great in that random Halloween bag I did up a while back?  They look absolutely fab against the new paint too! 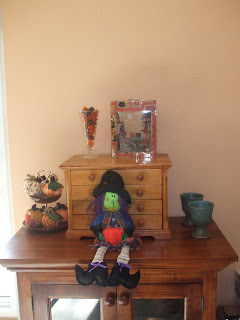 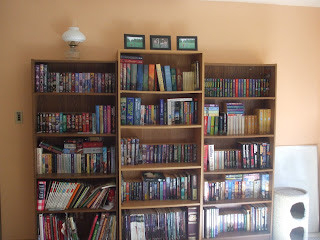 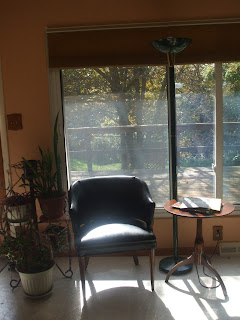 I can't wait to get my dining room furniture here and in place.  The chairs are actually here but need reupholstering... quite literally.  There's nothing left of the original materials, only the wooden frames remain.  That will be an upcoming project, perhaps next week.
I've got to get back to real life house work again.  We're having company for the weekend and I"m hoping to get all the random clutter, laundry, etc out of the way so I can scrub, vacuum, and mop on Friday morning.  I'll also be doing some baking later in the week.
Posted by MiniKat at 3:41 PM 6 comments:

So while my parents were visiting for my birthday my mom picked up a new book on felting. ("Felting-The Complete Guide" by Jane Davis, for those who might be interested.)

We flipped through it and I saw a few projects that were intriguing and she offered to let me play with the book for a while. The problem is I don't have any fiber to use for felting right now, at least not for this project(greens and blues), and I really didn't feel like waiting on the spare cash to remedy the situation.

One of Ms. Davis' projects is an adorable cookie ornament. She suggests that one could use store-bought felt but it won't look as nice as one made from thicker, homemade felt. For giggles I decided to try it out anyway, using store-bought felt and glass seed beads to pose as nonpareils. This is what it looked like: 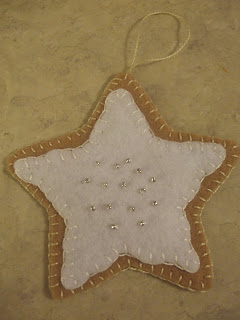 Frankly it looks like the baker left out the baking soda and/or powder. This would be why Ms. Davis warned against using store-bought felt. For obvious reasons I can't show you the picture in her book, but take my word for it... the one made from the homemade felt looks better. Loads better.... like "get me a glass of milk to go with that cookie" better. I even used two layers of tan felt, hoping I could make up for the thin nature of cheap felt.

Not to be utterly daunted I made a second one and took advantage of the two layers of tan felt. While I was at it I even stuffed behind the "icing" layer of the cookie. To make it easier to tell them apart the second ornament (on the left) has sprinkles. 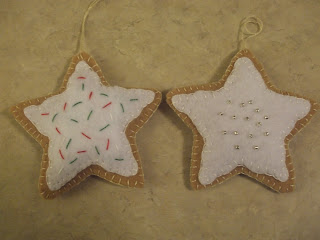 I liked this stuffed version better and opened up the first one (on the right; tan layers only) and poked some stuffing into it. As you can see I have a much poofier (that's a word, right?) looking cookie-thing.

Now that I see the two ways to stuff this cookies, I think I prefer the stuffed cookie but unstuffed icing. I also think the first cookie needed more nonpareils, but that can easily be fixed. I do like the sprinkles on the second one, which is what Ms. Davis called for in her original. I did use a thinner thread for my embroidery since I was working with a thinner fabric.

All in all I'm happy with the end results but I really want to get my hands on some roving in the right colors so I can do the entire project properly. I think it may have to wait for next year though since it's getting colder here and my hands don't like being wet and cold in colder months. Waiting gives me time to find the right rovings and something to look forward to. Also I might be able to talk Mom into trying the fabric making too since she's the one who bought the book.


And speaking of the book, I would highly recommend it to anyone wanting either more information on felting or is looking for some cool projects ideas. Heck, I may have to improve my knitting just to play with a few of them. Anyone who knows me should take that as a testament from the heart... and for those of you who don't know my knitting is horrendous on a good day.
Posted by MiniKat at 9:47 PM 1 comment:

I've spent the better part of the last six days dealing with pumpkins in one form or another. I'm finally finished with the first round of smaller sewn pumpkins to go with the larger one I made on the 24th of September. The pumpkins themselves are very quick to put together. The time consuming bit is the hand work on the leaves but I love the effect.

These are the ones I'm keeping for myself so I have an autumn centerpiece. 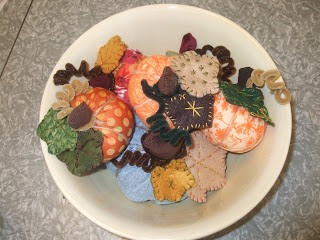 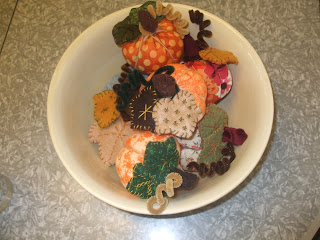 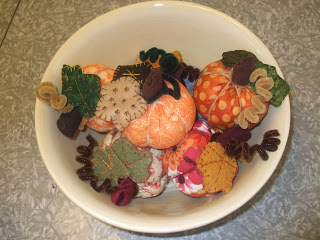 These are the ones I'm donating to the guild (in a pretty basket once I find one) to have for the silent auction next month. 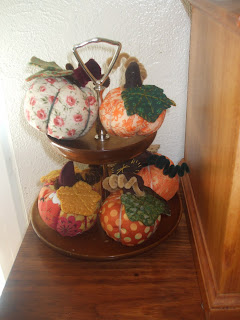 I still have a few more little ones to make so the basket and bowl will be nicely filled. But for the moment I'm done so I can move on to some other projects. I will pick these back up when the quilter's group meets this month and we're all making pumpkins.

Monday I spent the day in the kitchen. Two pumpkin cake rolls with maple cream cheese filling and two loaves of pumpkin spice bread were the result.

This is all the guild left me on the two cake rolls. 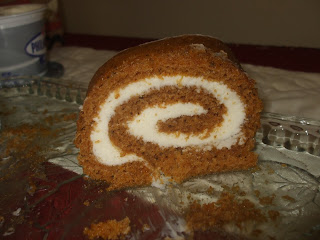 One loaf to enjoy now, and another in the freezer. 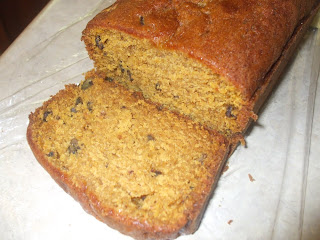 Life is pumpkin-filled goodness right now. Catch you all later!
Posted by MiniKat at 1:23 PM 1 comment: