I decided to skip Sunday's usual posting for today, since it's the last day of the year.

I pondered for a while to see if I had anything profound to type. The result is: not really. It's too rainy and too uncaffeinated out for deep and meaningful thoughts. One or the other, sure, but not both.

I just hope the next year sees more kindness, love, and humility around the world. 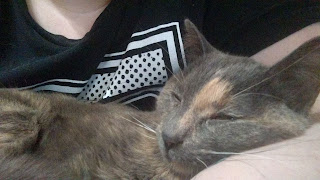 Chess pies I made last Sunday. 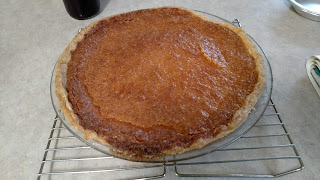 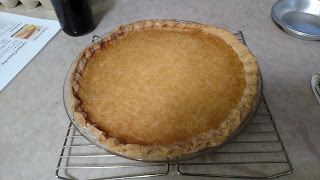 They were absolutely perfect. Still need to type up my final recipe.

And now I leave you with critters in silly places being adorable. 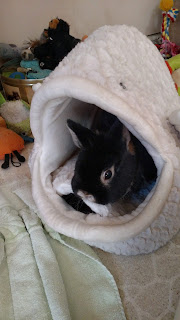 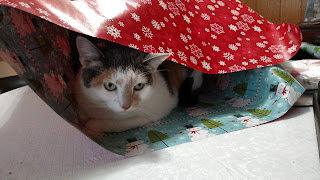 A Quick Bit of Downtime

Because bacon and caffeine are more important than pies, I've got a bit of downtime while waiting on access to our smallish kitchen.

This week started normally, but Tuesday one of my doctor's offices called asking if I could come in for a procedure we were planning that afternoon. That was more than a surprise. Fortunately not one I needed to have fasted for. I spent the rest of the week taking it easy and letting the FuzzyHusband bring me white chocolate milkshakes.


Thursday our nephew "Little D," who's not so little anymore, let me know he was on leave and in the area. So we went out to lunch and ran around town together. His wife couldn't come because she busy prepping for them to both be deployed overseas. I did get to chat with her on the phone for a bit. We really like her.

By Friday I was back to catching up on laundry and other lighter chores. Oh joy and rapture. Ellie Bean was so helpful in this endeavor. 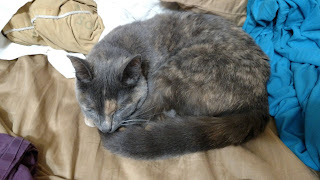 I did find some time to play with this little room setting though. I put it together to decorate our hutch in the kitchen. It still needs some printies and a clock. But I'm happy to get more things out of my stash an into displays. 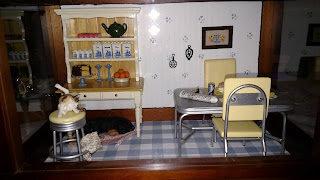 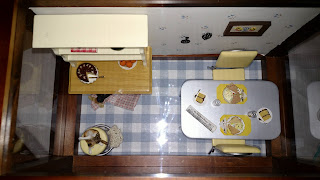 I've misplaced my notes from perfecting chess pies a few years ago, so I get to start over. This time the custard gets made with fresh eggs from a friend's hens and ducks. I made my crust dough Friday but was too tired to do anything with it.

Saturday was another burlesque photoshoot, so I had my hands full all morning and into the afternoon. But! The shoot was set at the previously mentioned friend's home and I got to visit with the birds when we were done. Silly me got so excited to pet the female turkey I forgot to take any pictures outside. My friend has so many varieties of fowl and they're all so gorgeous. I did get this picture of the youngest birds who are about to transition out of the mud room and into the barn. 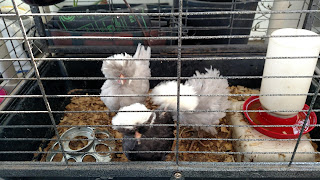 I love those poofy feathered heads!

When we got home, Pixel decided to watch FH oh-so-carefully as he trussed up a chicken for roasting. I promise it was not one we'd been admiring earlier! 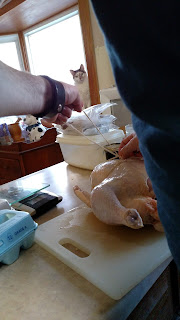 Himself is about done in the kitchen which means I can start rolling out my crusts and making custard filling. I've got rehearsal tonight which means captive taste testers.

Contents of the Green Bin

I'm running way late. Shocking, I know. It's been a busy day. I also need to make this a quick post so I can collapse into bed.

These are the treasures that were hiding in the green tub in last weekend's post. I"m looking forward to playing with these! 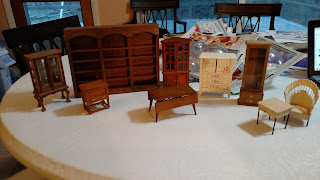 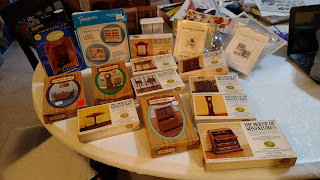 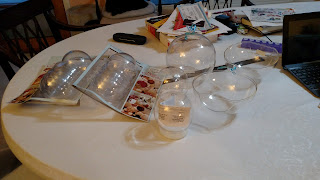 See you next weekend... hopefully before a lengthy photoshoot at burlesque rehearsal.
Posted by MiniKat at 11:35 PM 1 comment:

Why Are Sundays the Busiest Days? 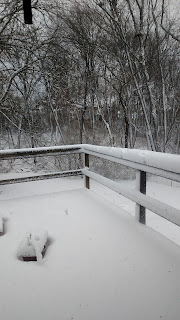 That's what we woke up to last Monday morning. FuzzyHusband worked from home and I cancelled my appointments for the day. Our neighborhood wasn't plowed at all until much later in the afternoon. I spent the day adding more things to the curio cabinets. 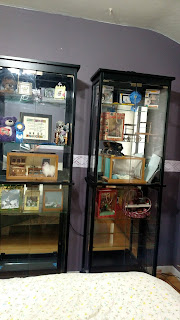 On Tuesday I went and saw a friend who's been having a rough patch. They have three kittens. The kittens decided I was warm and soft. I was more than ok with this. 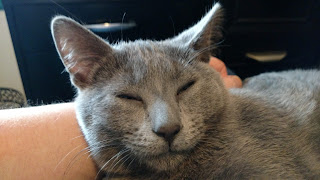 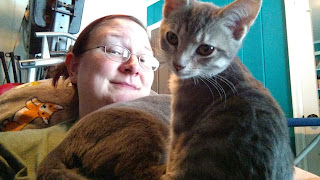 Wednesday we finally moved Victor upstairs. He's still not thrilled about his change of scenery. 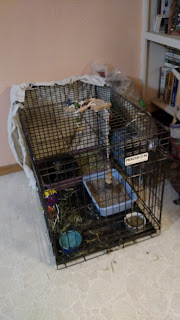 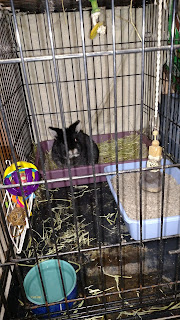 Friday I did some more cleaning and rearranging. This chest used to sit in the dining room, empty. Now it's home to various hair clips and cards from FH. I also hung our wedding photo on the wall, further freeing up space on the dresser. 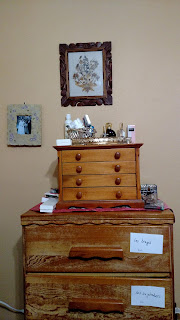 Saturday I baked. I baked a lot. Two of Mary Berry's Tunis cakes, but decorated in my own way. I was quite proud of the snowflake/flower mash up I created with the holly leaves on this cake. 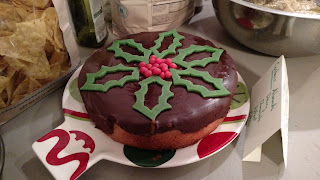 I forgot to get a photo of the second cake before it was cut. I used the 8 cut away sections from the first cake's holly leaves to decorate the second one, along with more red berries. I did did a photo of the last slice with a little help from FuzzyHusband. 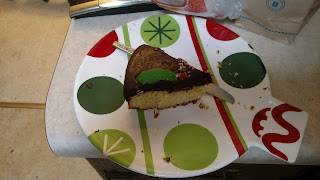 The reason I was baking was a "Friendsgiving" celebration, hosted by a dear friend. He doesn't really have family in the area, so he decided to have a celebration with close friends after the holiday when everyone would be available. Much fun was had AND he cooked one of the best turkeys I've ever eaten.... and I loathe turkey. I went for seconds. The best part was he'd never cooked a turkey before yesterday!

Another friend did some baking too. He brought a Cherpumple. You might have heard of a turducken, right? The chicken stuffed in a duck that's stuffed in a turkey and cooked together. Yeah. This is a baked goods version. Three different pies baked into three different cake flavors. It was a heck of a thing! 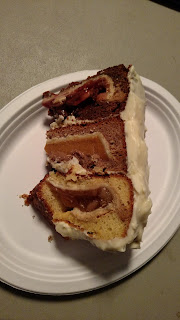 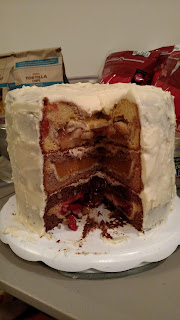 Today's been full of cleaning, a niece's choir concert, and a burlesque rehearsal. I still haven't gotten around to sorting through this bin of treasures gifted to me by a mini friend who is transitioning out of 1:12 scale and into quarter scale. 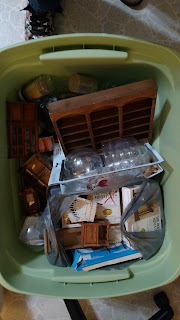 That will be something fun for next weekend! We've got another Friendsgiving party next Saturday too. And I still need to put up my decorations. So yeah. I'd better get to it! See you next Sunday!
Posted by MiniKat at 11:42 PM 1 comment: