FH, Gus, and I are on the way back home from spending the holidays with family down south. I hope everyone had a safe and happy time with their families and friends! 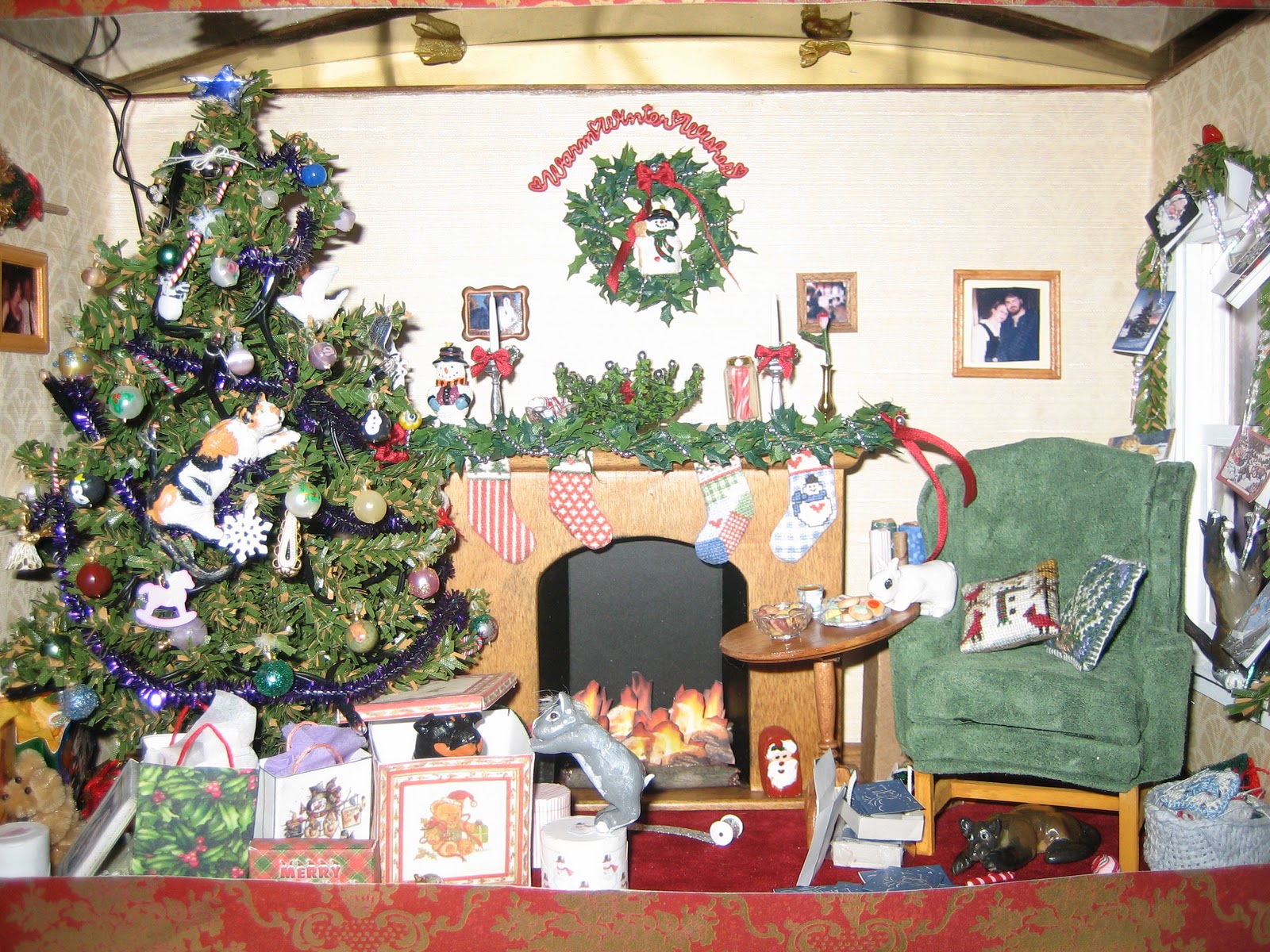 Posted by MiniKat at 9:00 AM No comments:

Today is the Winter Solstice, and therefore I'm celebrating our wedding anniversary with FH. Seven years together and going strong.  According to the Julian calendar, our anniversary is tomorrow, but we decided to celebrate on both days, because why not? ;-) 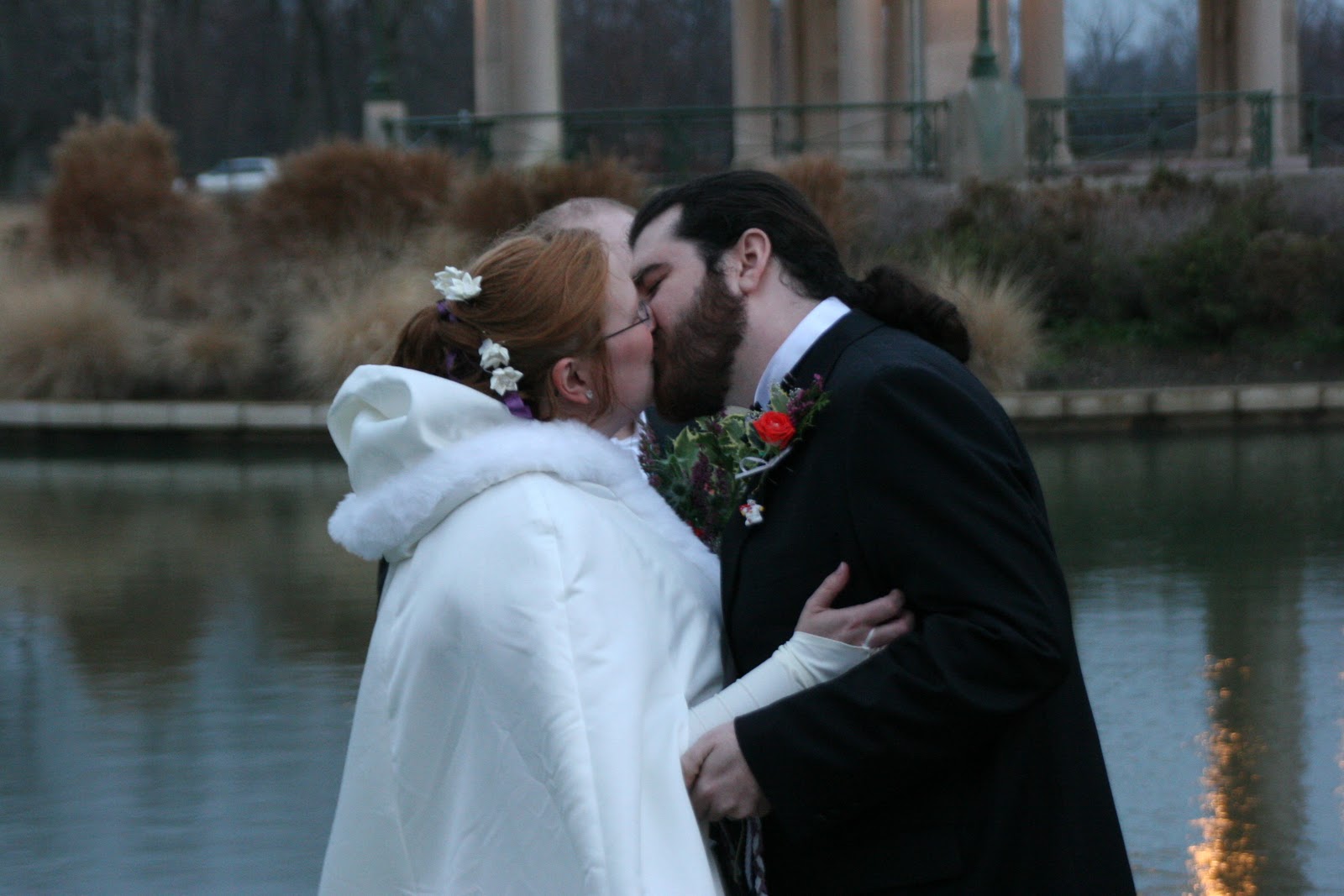 Of Sewing and Strep

The past week has been interesting to say the least. Mr. P moved back to his bachelor pad, which means he was finally strong and healthy enough to live on his own again. Then I came down with strep throat. The timing was irritating, but I caught it fast (Thursday) and am already starting to feel normal again.

I didn't get as much done as I'd hoped in terms of cleaning, decorating, and projects but given the circumstances, I'll take what I've got.

I finished the cleanup work on these eight autumn napkins. I love the contrast of these too fabrics. The picture doesn't do them justice. 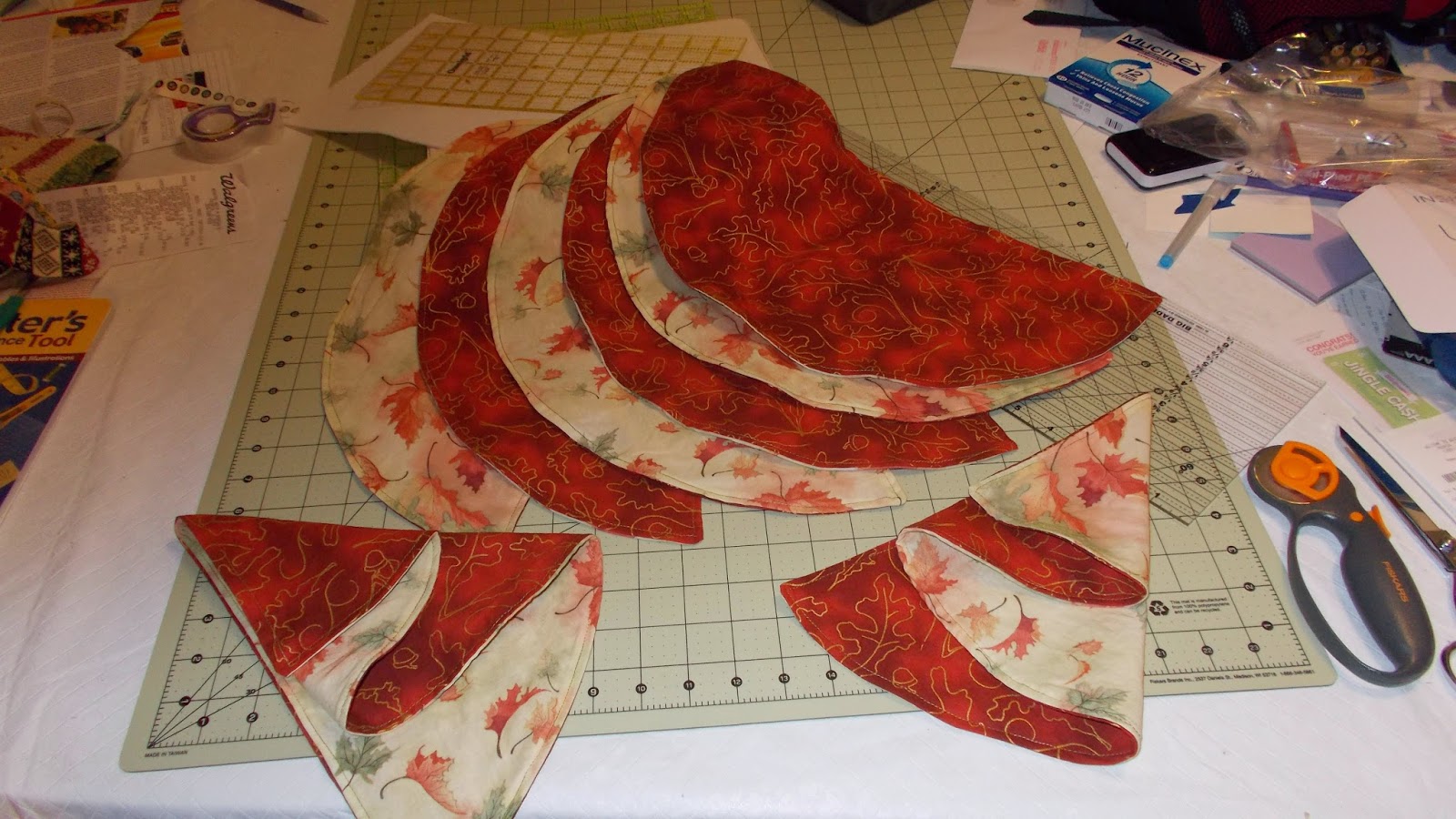 The placemats are "pillowcased," trimmed, trimmed, turned, and pressed. They still need the side opening slip stitched closed and quilted. However I'm tabling them until after I get my holiday gift sewing done. I'm thinking about quilting them with autumn designs and that will take longer than I have time for currently. 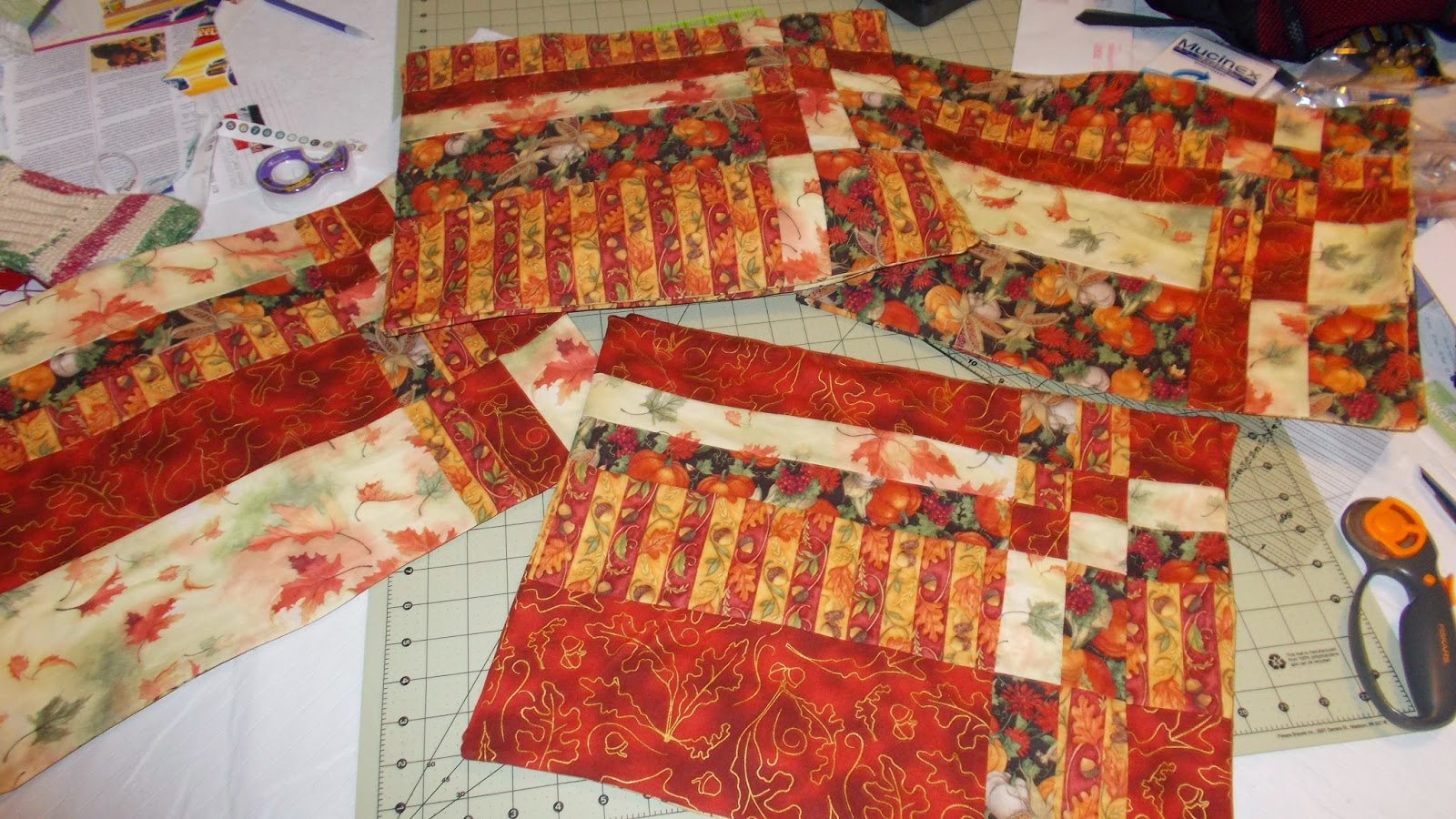 And whilst I was cleaning I unearthed these 6 1930's reproduction prints that I'd purchased to make quilt shop bolts from, so I got them cut last night. Like the other 59 from last weekend, I haven't cut the individual fat quarters yet. None of these particularly appeal to me for more use in miniature, so the remaining fabric will get put in my life-size quilting stash. 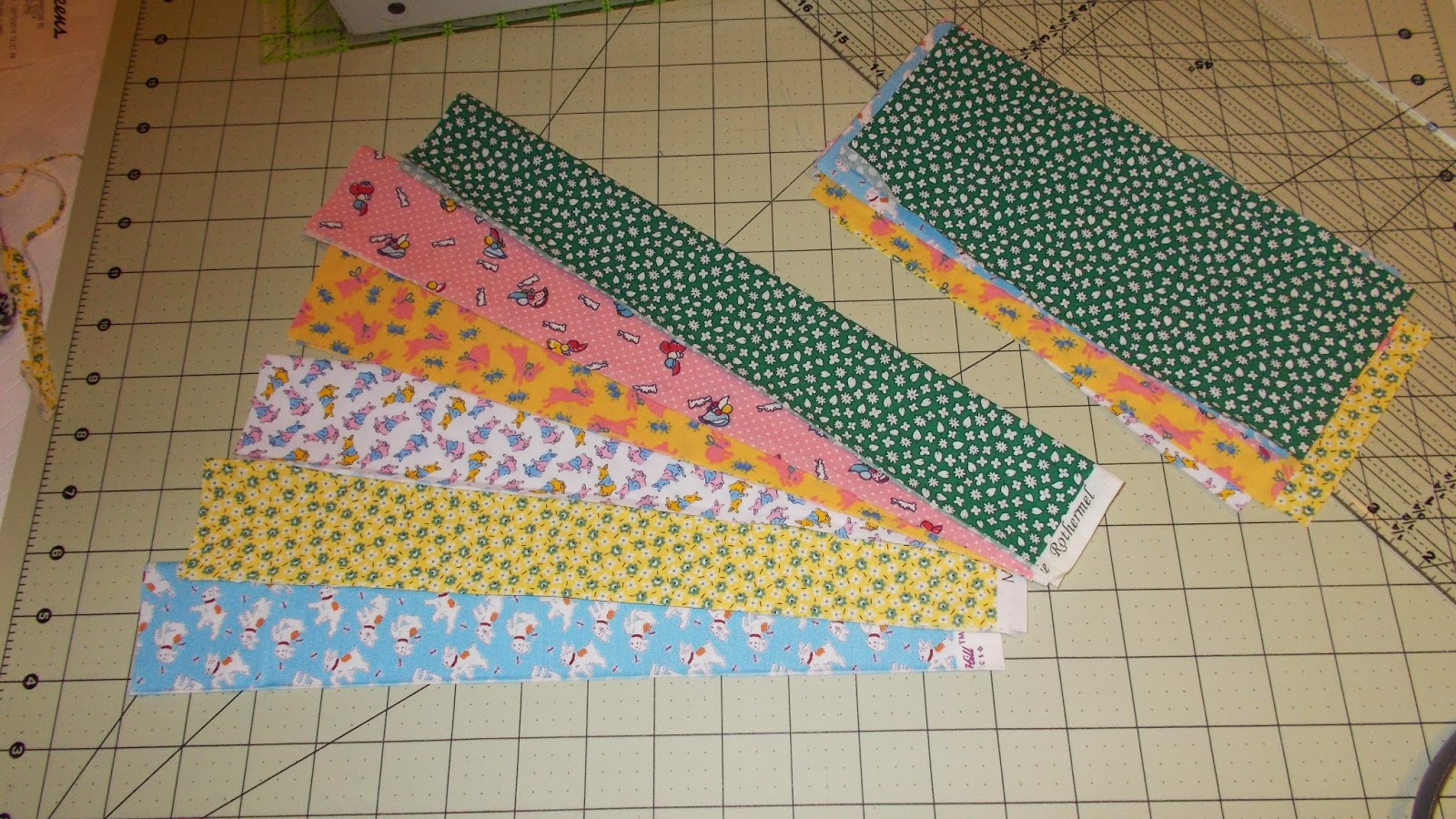 I finally found where I'd stuck this picture. I took it back in June. It's the quilt shop bolts I'd made to date, organized by color or collection. I need to get an accurate count at some point. There was one, but apparently the note was "put in a safe place." Plus I think I finished a few more bolts since then, not to mention the 65 bolts ready to be completed. 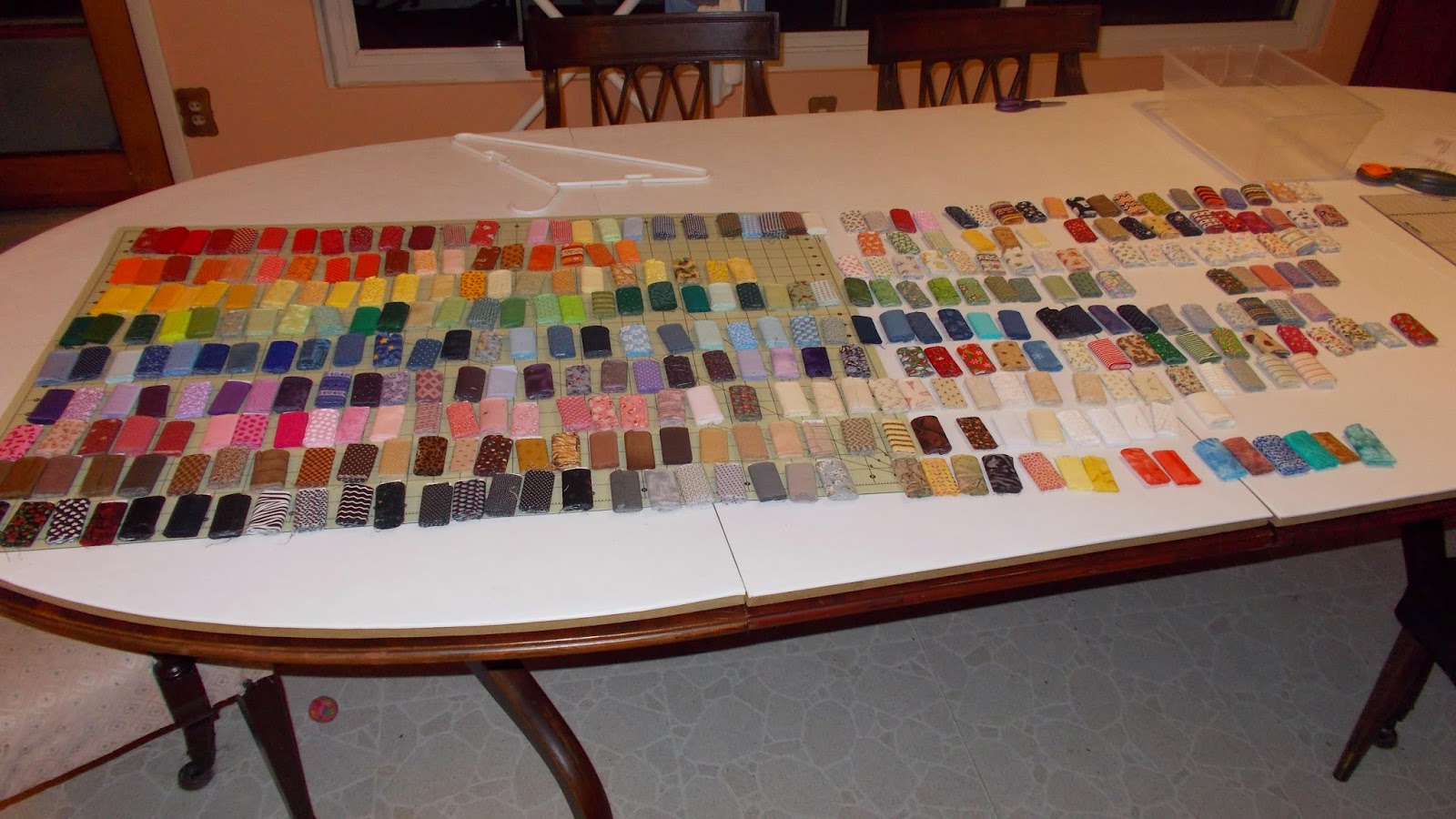 The hard part will be resisting the urge to buy more fabrics until I can get my custom shelves cut and assembled. That's actually going to be an issue for a few months. My friend who built a laser cutter sold it. He wants to build a larger one and needed the capitol to start the project. It will be a while before a new one is finished. I was also going to have him cut the other windows I need for the 1930's Nursery roombox. So that project is on hold for a while.

Now that I have access to the actual Patchwork Peach building again, I will likely start in on painting, flooring, and interior accents after the holidays. Perhaps by then I'll have found someone else with a laser cutter in the area who would like to help me out.
Posted by MiniKat at 1:45 PM No comments:

What you see below is 59 more pieces of fabric cut and pressed in preparation to make into miniature quilt bolts for the Patchwork Peach Quilt Shop. I've had lots of remnants and fat quarters for the project laying around the dining room since I hurt my shoulder in July and since I want to decorate for the holidays, I needed to put them away. 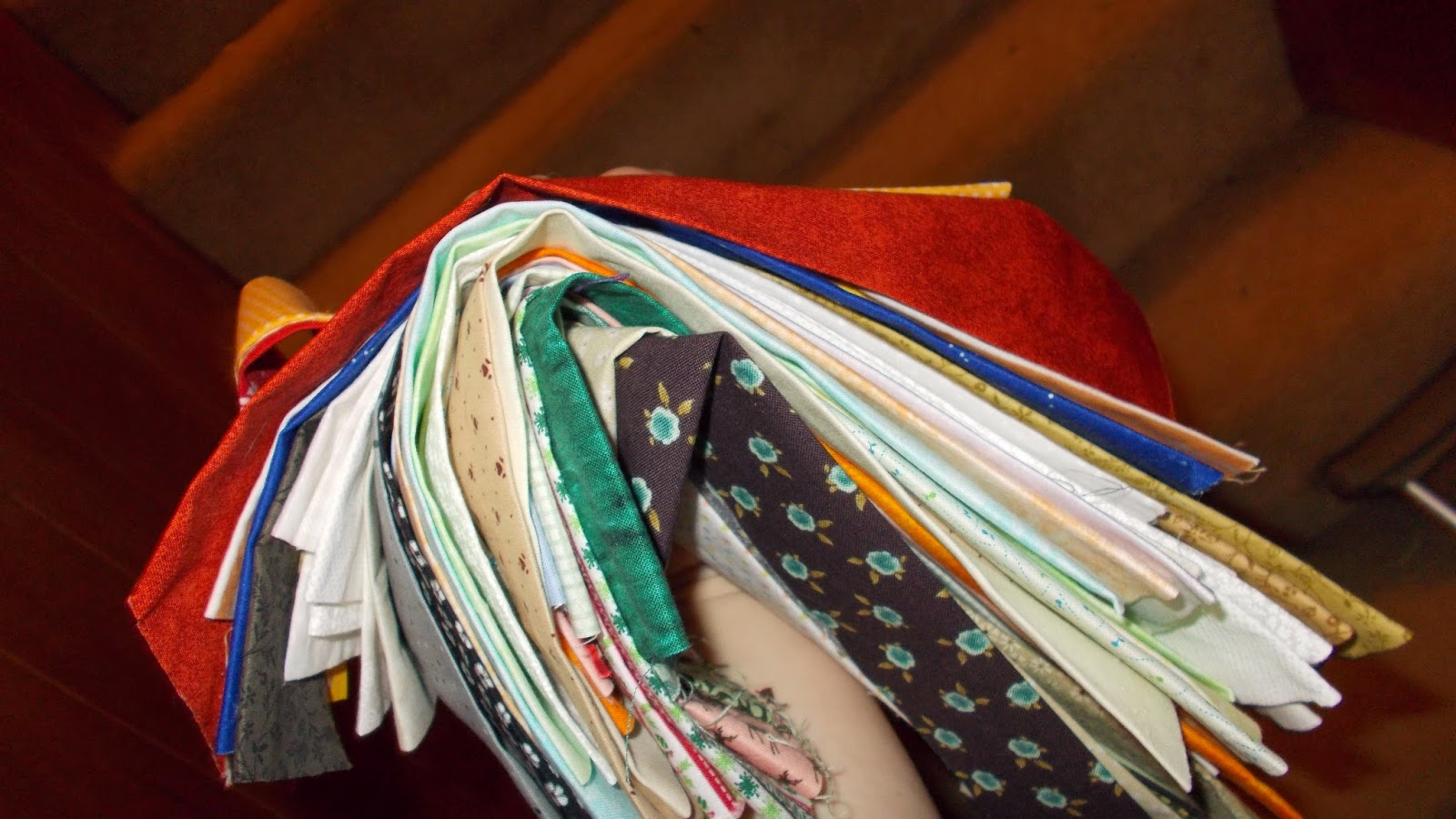 So instead of shoving the fabric into a box and putting it "in a safe place" for a bit, I went ahead and cut my strips from everything and pressed them. I haven't cut my mini fat quarters from all these yet. I'm holding off on those. I am putting the readied bolt sections in the same box as the soon-to-be fat quarters though. But at least I'll hopefully have a better idea of what I'm doing when I get the box out again.

I'm still waiting on access to a laser cutter to make the shelving for the Peach. Hopefully in the coming year I will be able to get my hands on one. I'm also waiting on Mr. P to be sound enough to be able to return home so I can actually work on the interior of the Peach... the building is located in our guest room.

That's all for this week. I'm hoping I will have the dining room tidied up and decorations up by next week. We'll see how that goes.
Posted by MiniKat at 1:03 PM No comments:

I'm a day late thanks to traveling for the holiday, but it was lovely.

These are the gifts I made for my SIL's birthday and first wedding anniversary. She'll be hosting Christmas at her house this year and I wanted her to have something elegant to enjoy. 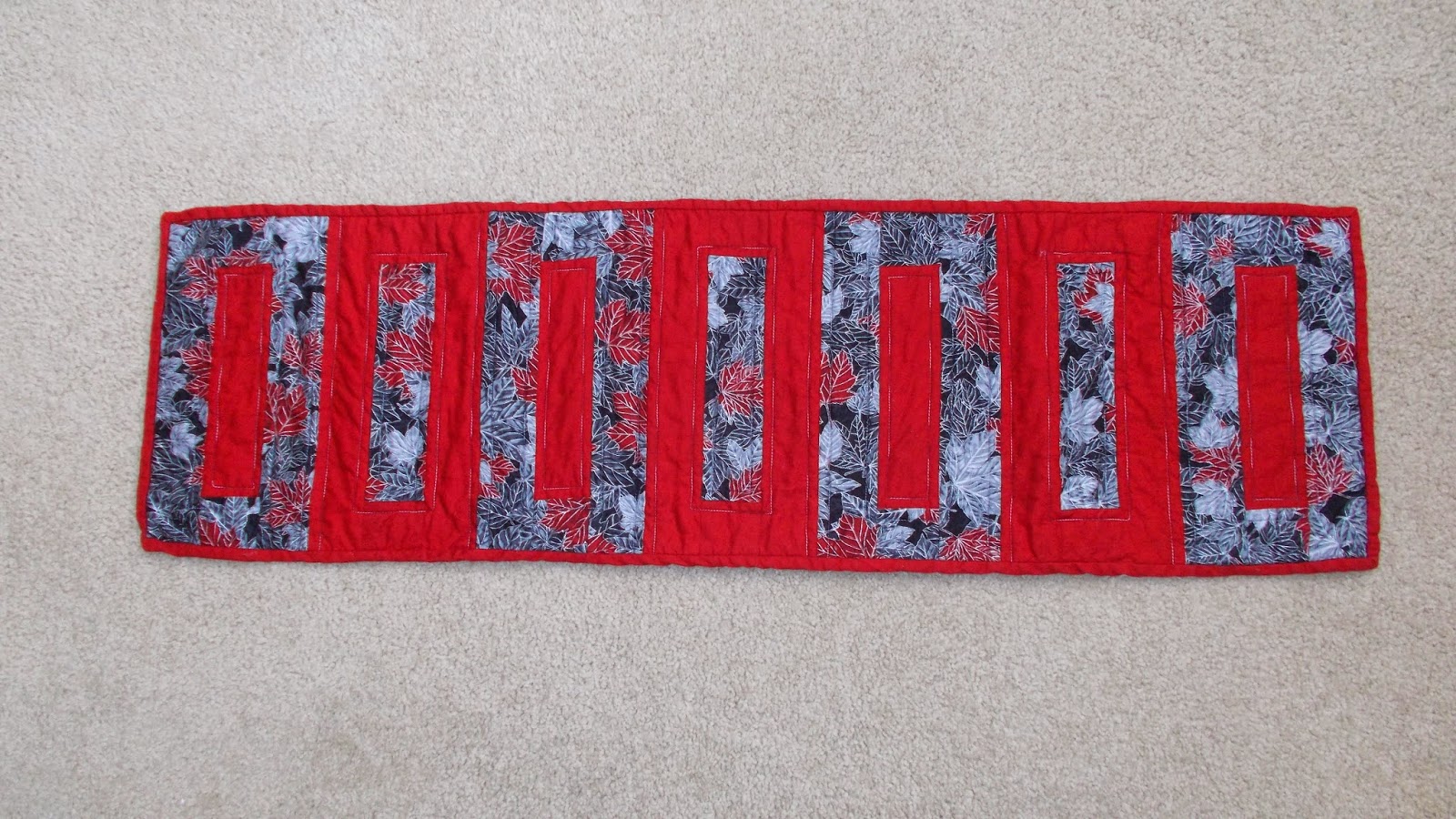 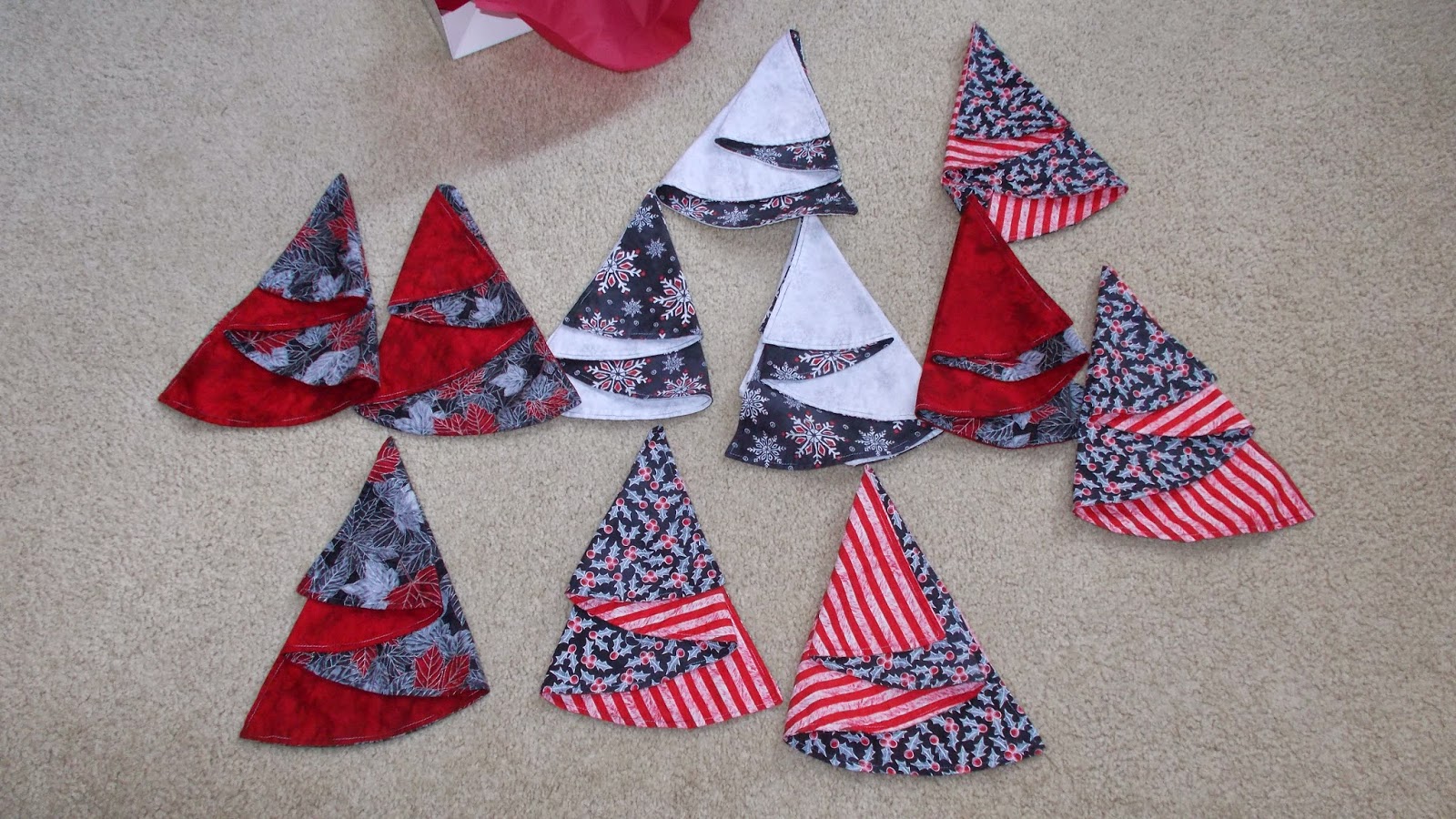 I finally finished hand sewing the binding on my little runner. I'm not overly happy with this one, but it's finished. 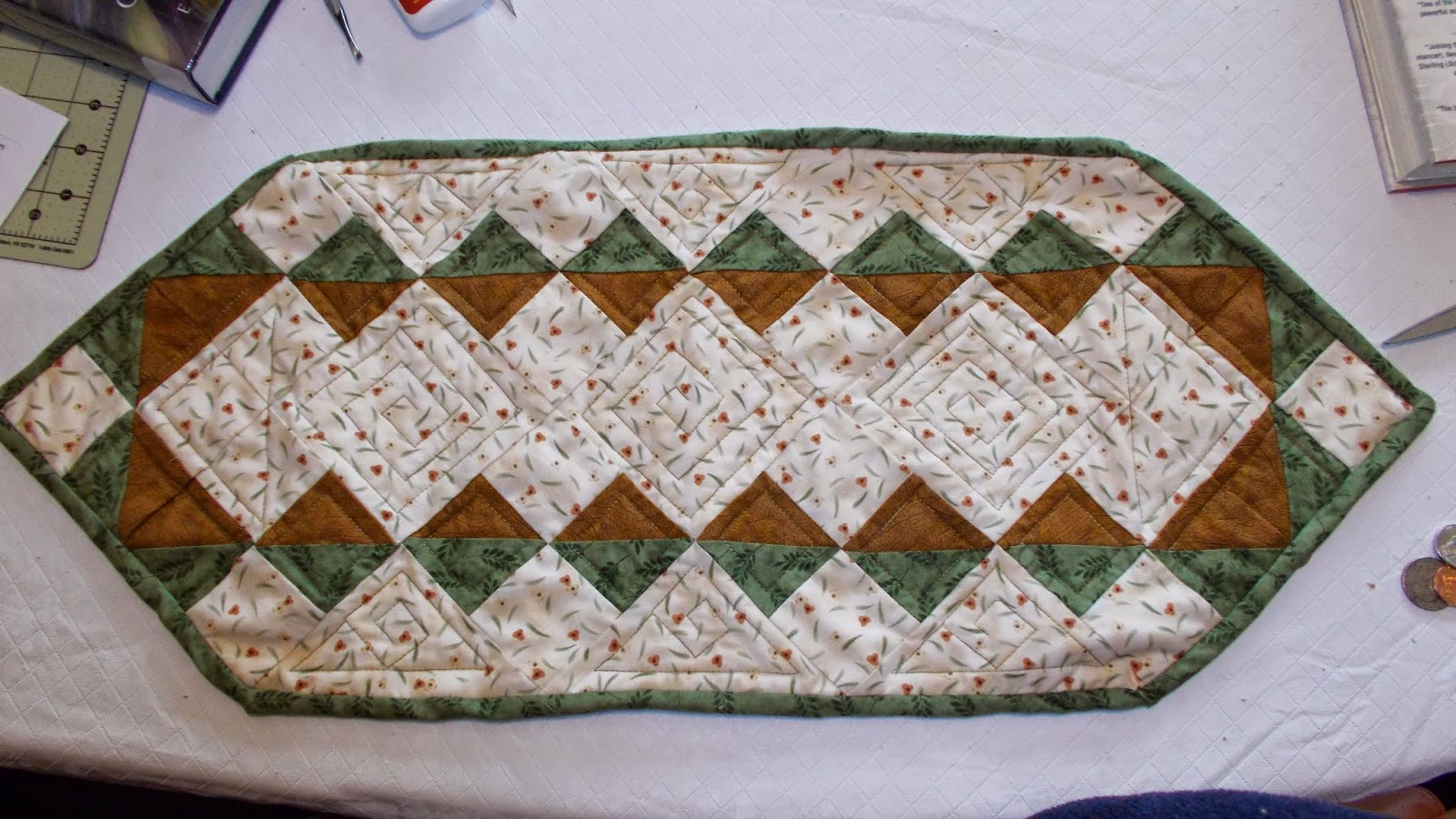 That's all I've gotten done this past week. I'm hoping to finish up a few more things so I can start cleaning up all my sewing and decorate for the winter holidays.
Posted by MiniKat at 12:49 PM No comments: