Running Behind, But Yarn!

FuzzyHusband and I took a trip south this weekend to see "the wee nephew and co." We're just getting back, and since I forgot to prep a filler post for this morning, I'm running late.

These towels have been lingering in my stash for a while. I needed to find the correct colors of cotton. 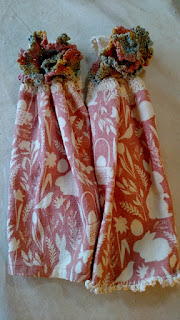 Then I made a second purple newsboy hat for our favorite bartender. The look on her face when I "magically" pulled out of my bag was priceless. She'd been admiring my hair for weeks and I had another skein of the yarn left. 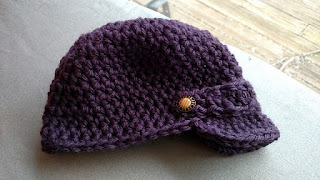 Another towel set that had been waiting for the right yarn to be found. Love the colors on these. 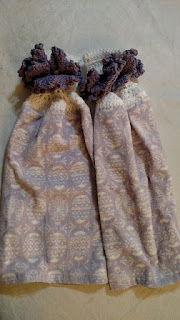 And now for the current WIP: 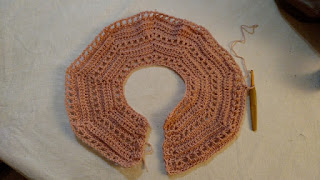 This will be a bed jacket for Grandma. I found the pattern on Ravelry and the yarn's been moving around with me for over a decade. It's 50/50 wool and mohair. 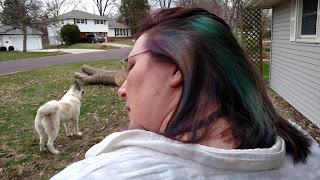 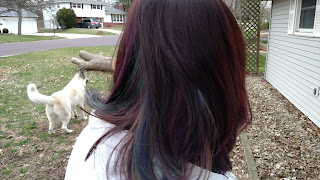 That's all for this weekend. It's getting late and I still have things to do before bed. See you next weekend!
Posted by MiniKat at 9:42 PM 1 comment:

And Now For Something Completely Different

No crochet happened this week. None. Because I spent 63 hours working on this: 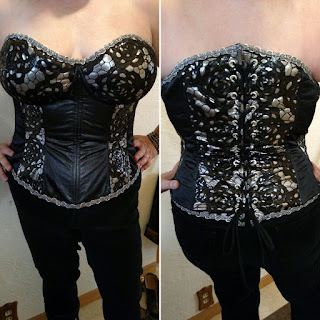 So pleased with how this turned out, despite being a rush job!

The pattern is McCall's M7339. My client chose that metallic silver fabric, which happened to be a knit. So I interfaced all the body pieces as well as the lining pieces. The first 8 hours was pattern piece alteration. Once the muslin mock up fit, I cut the lining, the corset body fabrics, and lots of interfacing. So much interfacing.

The black fabric is actually the "wrong" side of the silver fabric. Little glimmers of the silver peek through, for a fun contrast. The black roses are actually a sequin netting fabric that I overlaid on top of the silver.

FuzzyHusband's leatherworking tools came in handy when it came time for the grommets. Made that process so much easier. Also thankful for the twin needle on my sewing machine and the invisible thread from my quilting stash. Adding the trim was so easy thanks to them!

My client wore this last night on stage during a burlesque show. She was a lot of fun to so for. I look forward to working with her again.... with more time allotted for me to sew in. 63 hours in 6 days was not fun. ;-)

I'm going to relax for a few days and get back to crocheting once my hands forgive my for the abuses heaped upon them. See you next weekend!
Posted by MiniKat at 7:00 AM 1 comment:

Didn't get much in the way of complex projects worked on this week. Spent lots of time in the planning stages for a couple future projects.

I did get a quick little cowl done. 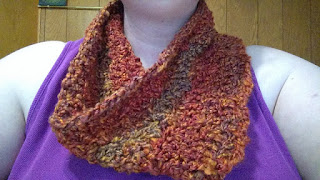 And a few towels. 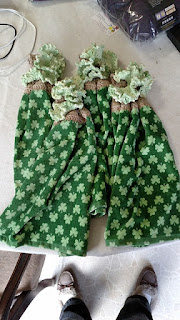 Oh and a jellyfish! 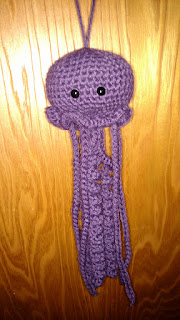 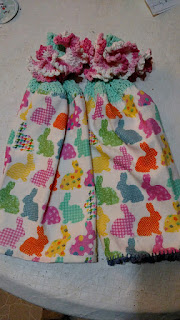 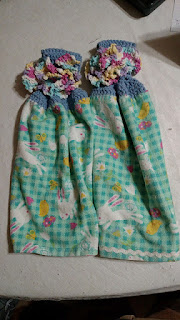 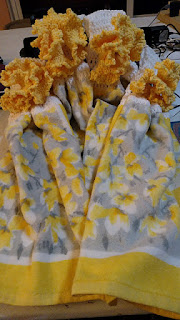 I've got a big sewing project that will take the majority of my time this week. Here's hoping I can pull it off in time for its deadline. See you next weekend!
Posted by MiniKat at 12:29 AM No comments:

I'm finally feeling more human again. The month of February was unkind to my immune system. As a result I'm trying to catch up on cleaning and chores and have less time to play. But I've still been productive!

First off, I got the buttons for the newsboy hat. I had a good rummage through my stash and came up with this pair.

Then a lone skein of seafoam colored wool jumped into my cart while I was wandering around JoAnn Fabrics. After a Ravelry search, I found a free pattern by the same company that made the yarn. This one was a lot of fun to work up! So many neat textures! Also, the buttons I used on this hat were from my stash. They had been an option for the newsboy cap. 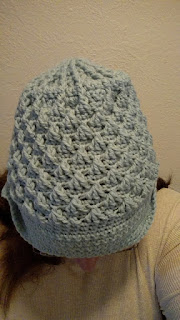 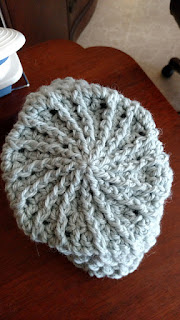 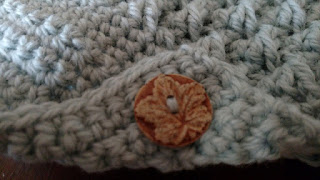 I had a little bit of the seafoam yarn left over, so I decided to finally try out this fun owl pattern. Not bad for a first try at amigurumi! I'd been meaning to learn how to make the African flower hexagon motifs I've been seeing everywhere and finally got around to trying them. I used some leftover kitchen cotton and went to town. There are actually two motifs that are stacked and attached via single crochets around the edges. Made for a nice hotpad in the kitchen. 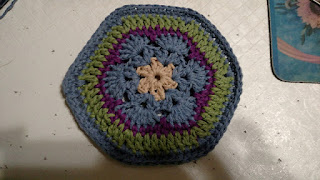 I've got a few WIPs happening right now. One is an amigurumi, which I've discovered is a workout for one's hands. I can only do so much on one of those figures before my hands need a rest. There's also a quartet of towels and a quick cowl. 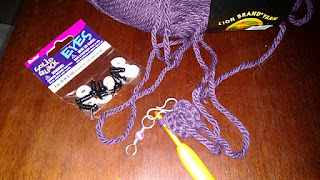 Cowl is a free pattern online found via Ravelry. 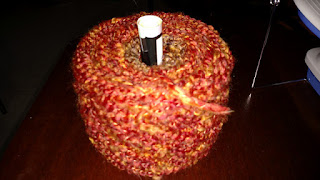 Towels are my own pattern. 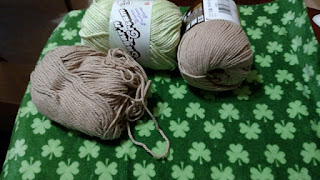 That's it for now. Hoping to finish up the cowl, do a few more rounds on the jellyfish, and maybe get going on these towels... all in between loads of laundry. See you next week!
Posted by MiniKat at 1:27 AM 1 comment: