When I mentioned to a friend that Victor was going in to be neutered, her response, "oh poor bunny loosing his jellybeans." After I stopped giggling like a fool, I tucked the expression away for later.

As the title and previous statements suggest, Victor has indeed joined the ranks of the de-sexed. This means he was my project all week.

Monday I dropped him at the vet for a checkup and surgery. He was doing so well that afternoon, they said I could come bring him home. Poor little mite was very sleepy. 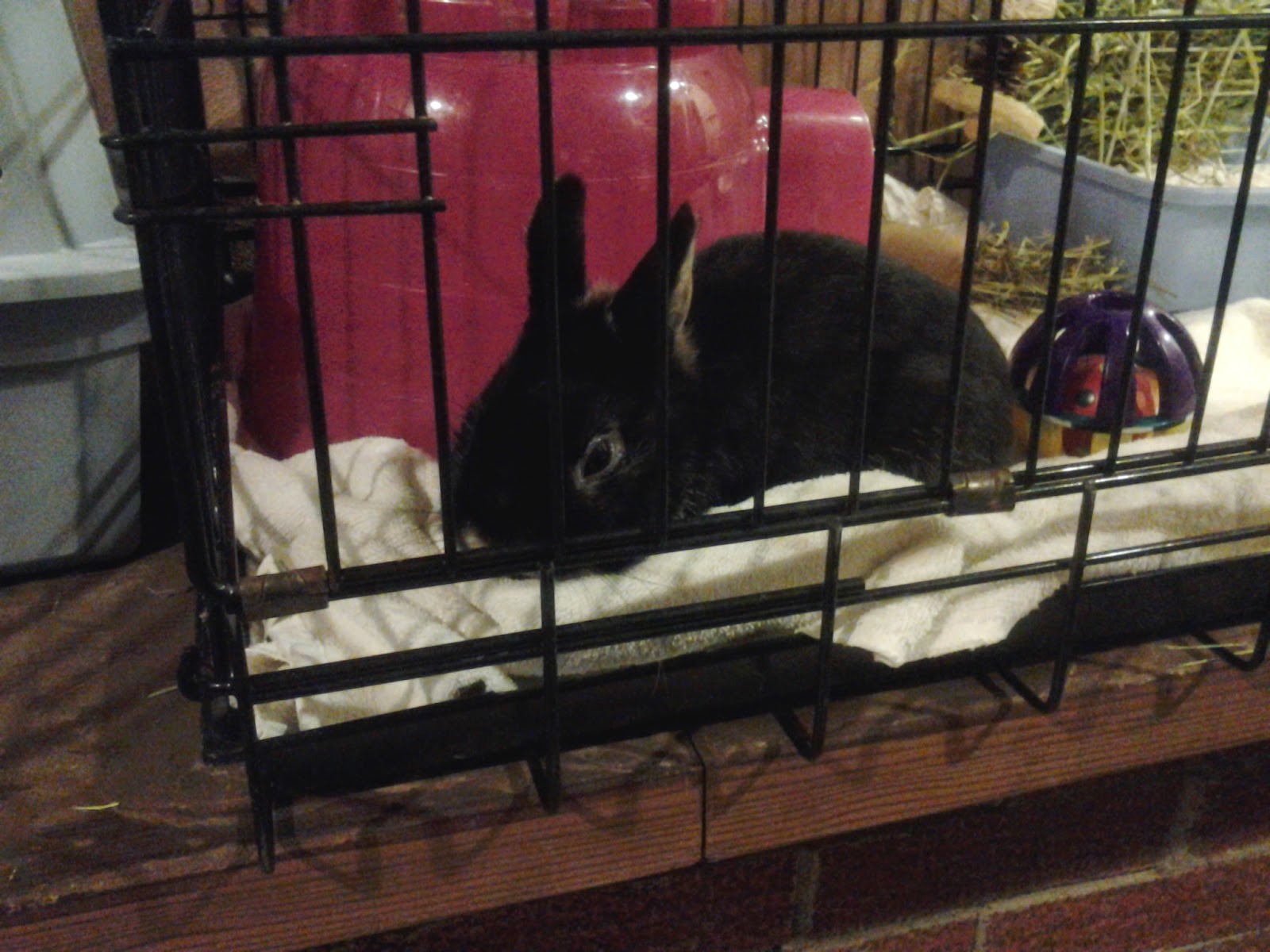 Pixel stopped by to check on him. 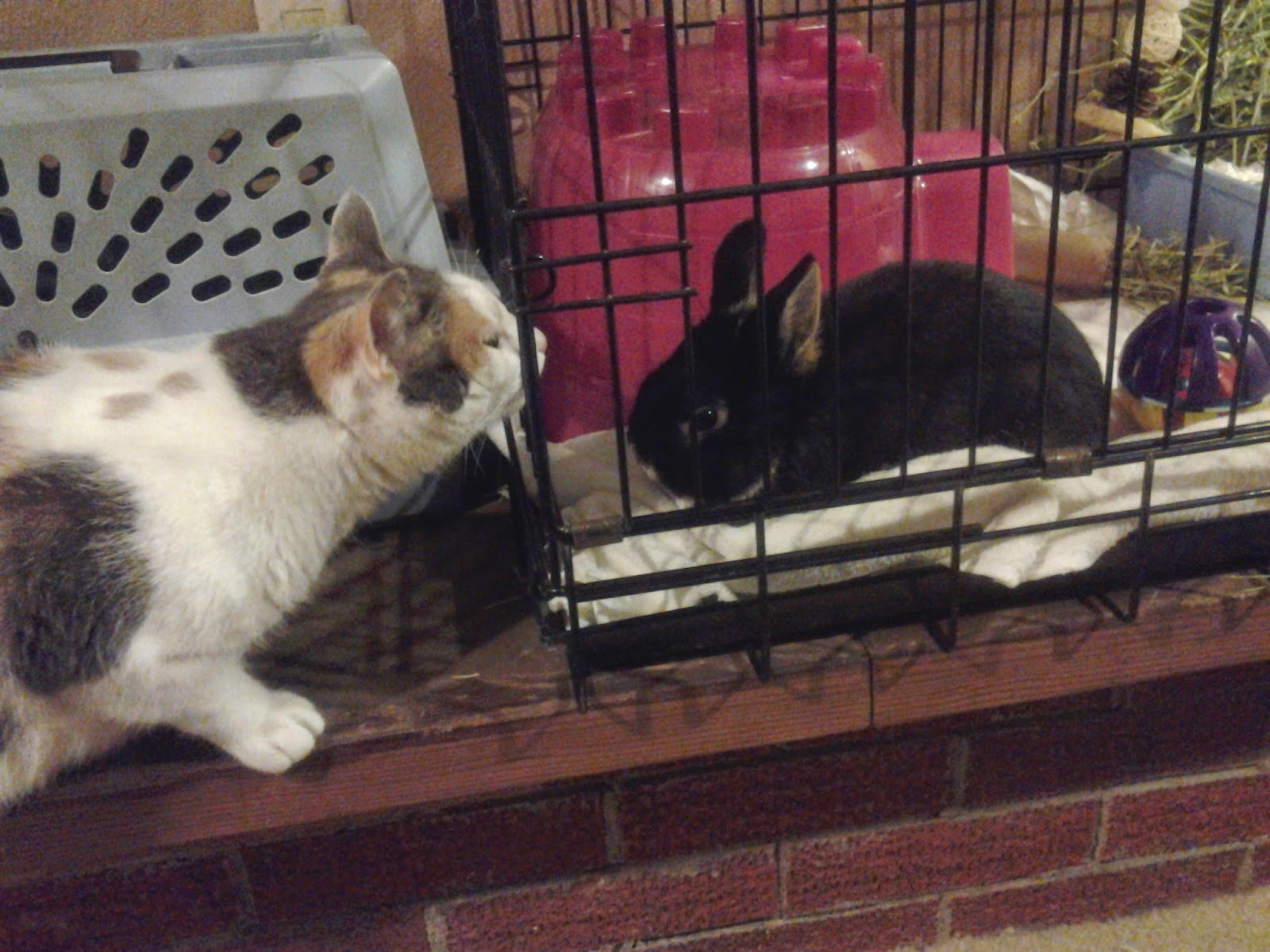 He'd eaten quite a bit at the vet's office, but his appetite was off for a couple of days. Nothing so bad that I needed to syringe feed, but I kept an eye on him. The anesthesia 'hangover' lasted until Wednesday. Then he began eating everything in sight. He was also confined to quarters until Thursday since he is such an active fellow. This did not make him happy.

On Thursday I let him out after blocking off several places with baby gates. Guess who can take a running leap and clear a baby gate? If you answered Pixel or Artie, you'd only be half right. Victor demonstrated his new skill set to me just as I got comfortable on the couch. He was up the stairs in a flash and I just sat there, bemused. I'm just happy he didn't pop a stitch!

I caught him in one of his favorite places later that day. At first blush this doesn't seem like such a bad idea... he can see the outside from here and rest. 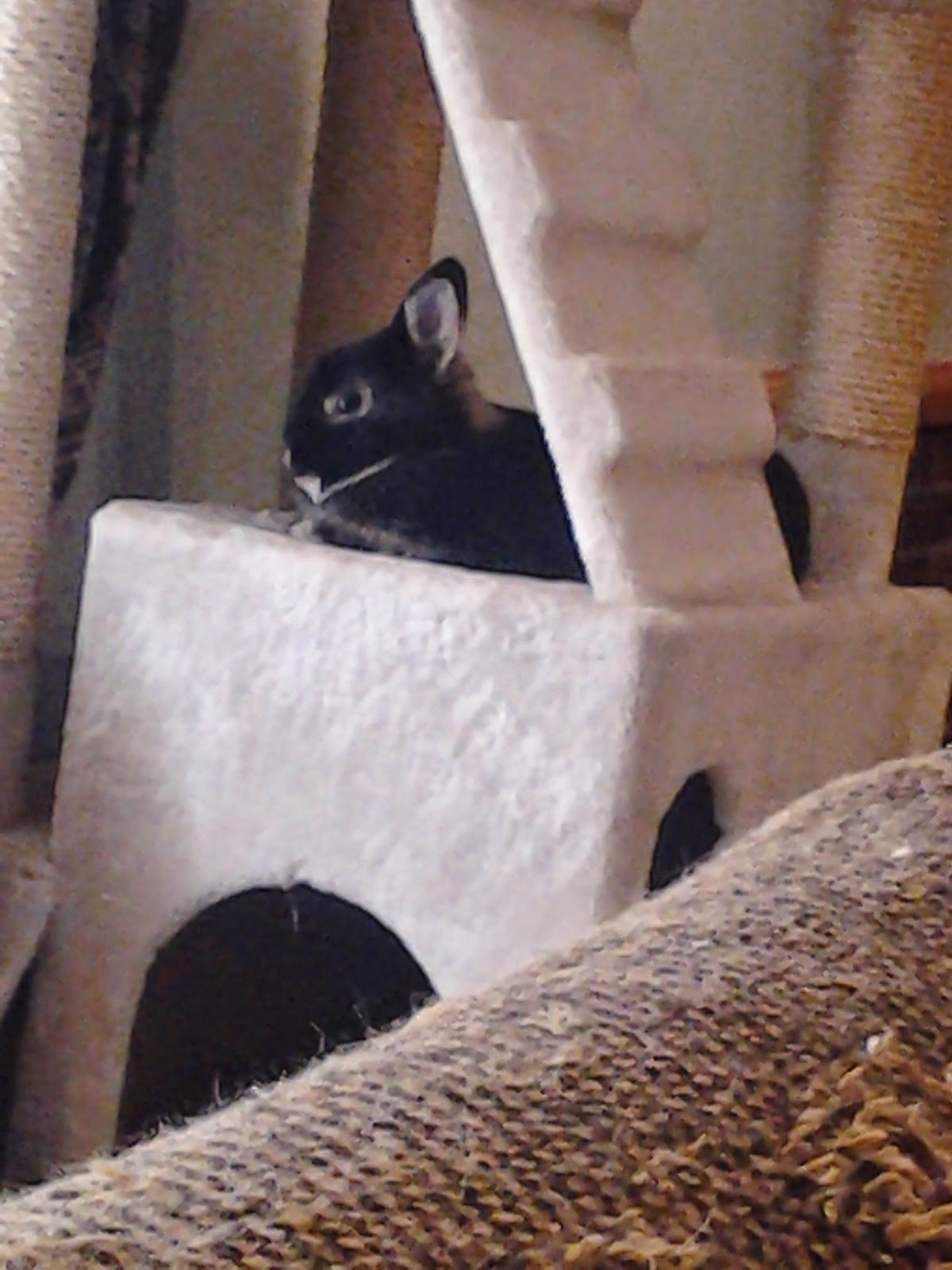 But when you take a good look at this photo, you can see the only way for him to get up there is leaping from an ottoman that sits next to the cat tree! 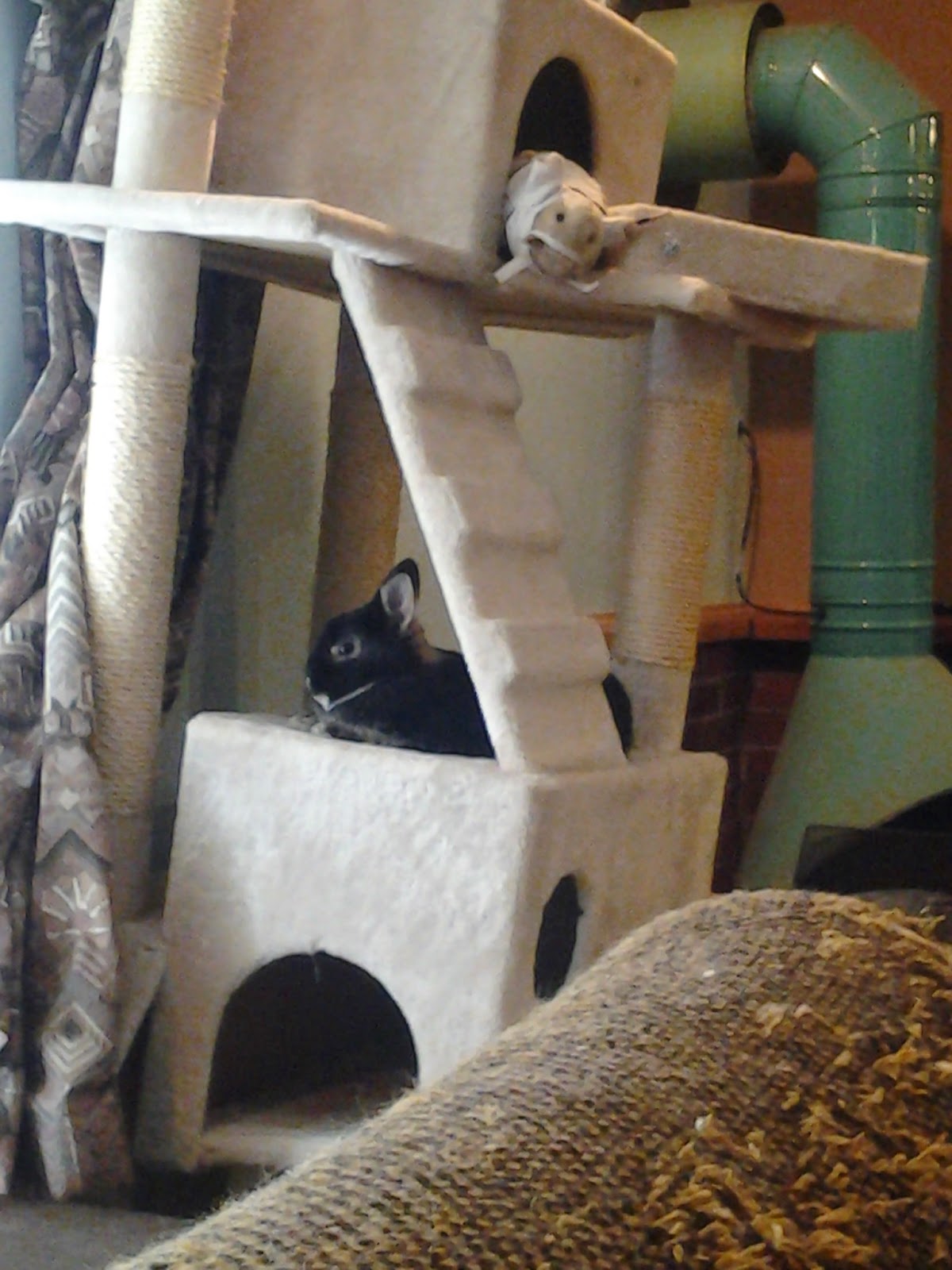 That's all for this week. Hopefully things calm down and I can have some projects worked on by next Sunday.
Posted by MiniKat at 9:33 PM No comments:

We (FH and I) spent various bits of the last week working on gardening projects. I'll just give you the highlights here.

Transplanted hostas from thinning out plants in the same bed, but opposite end. 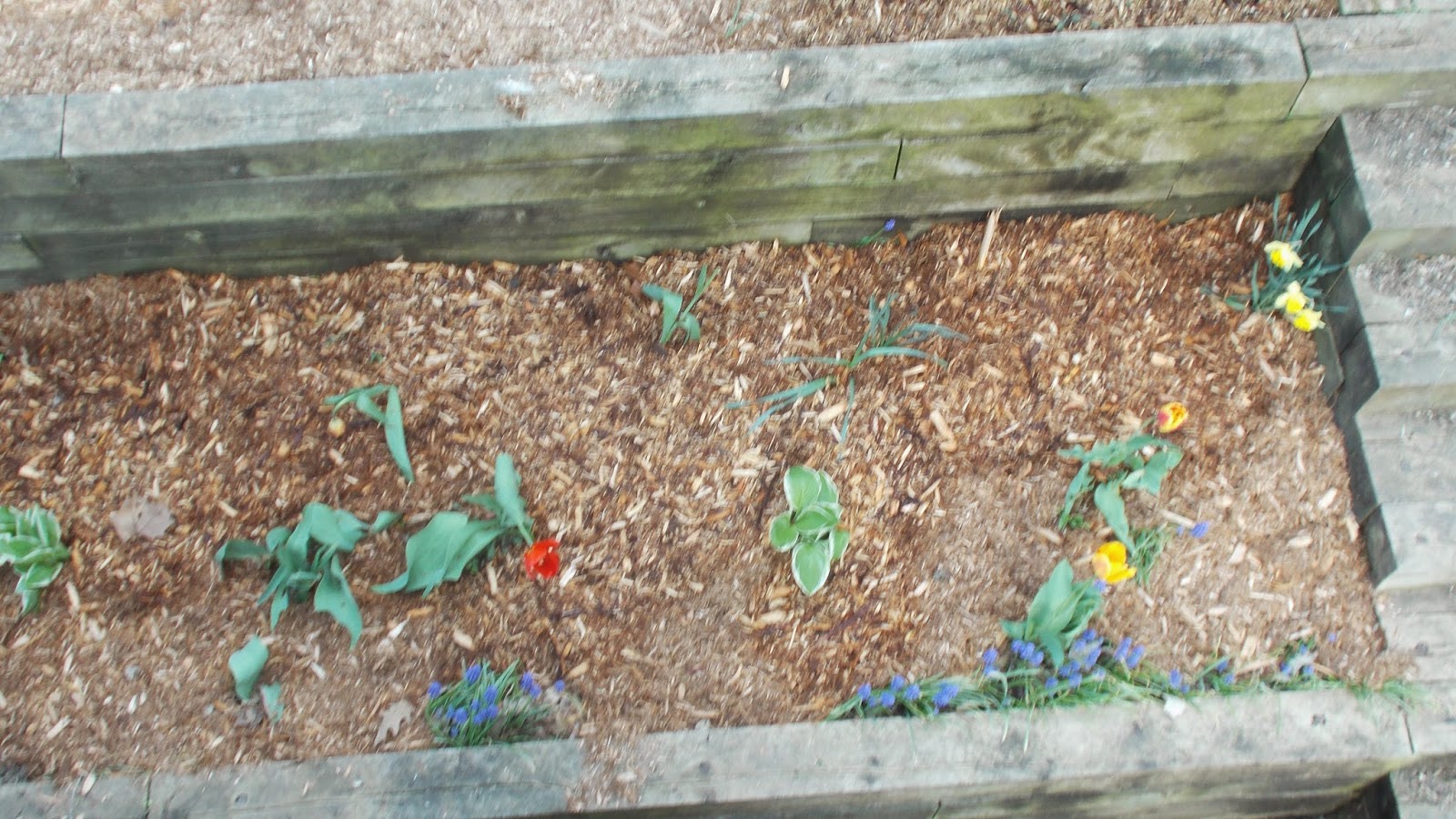 Planted lily of the valley along part of the front of the house. More will be planted on the other side of the window well in the coming week...weather permitting. 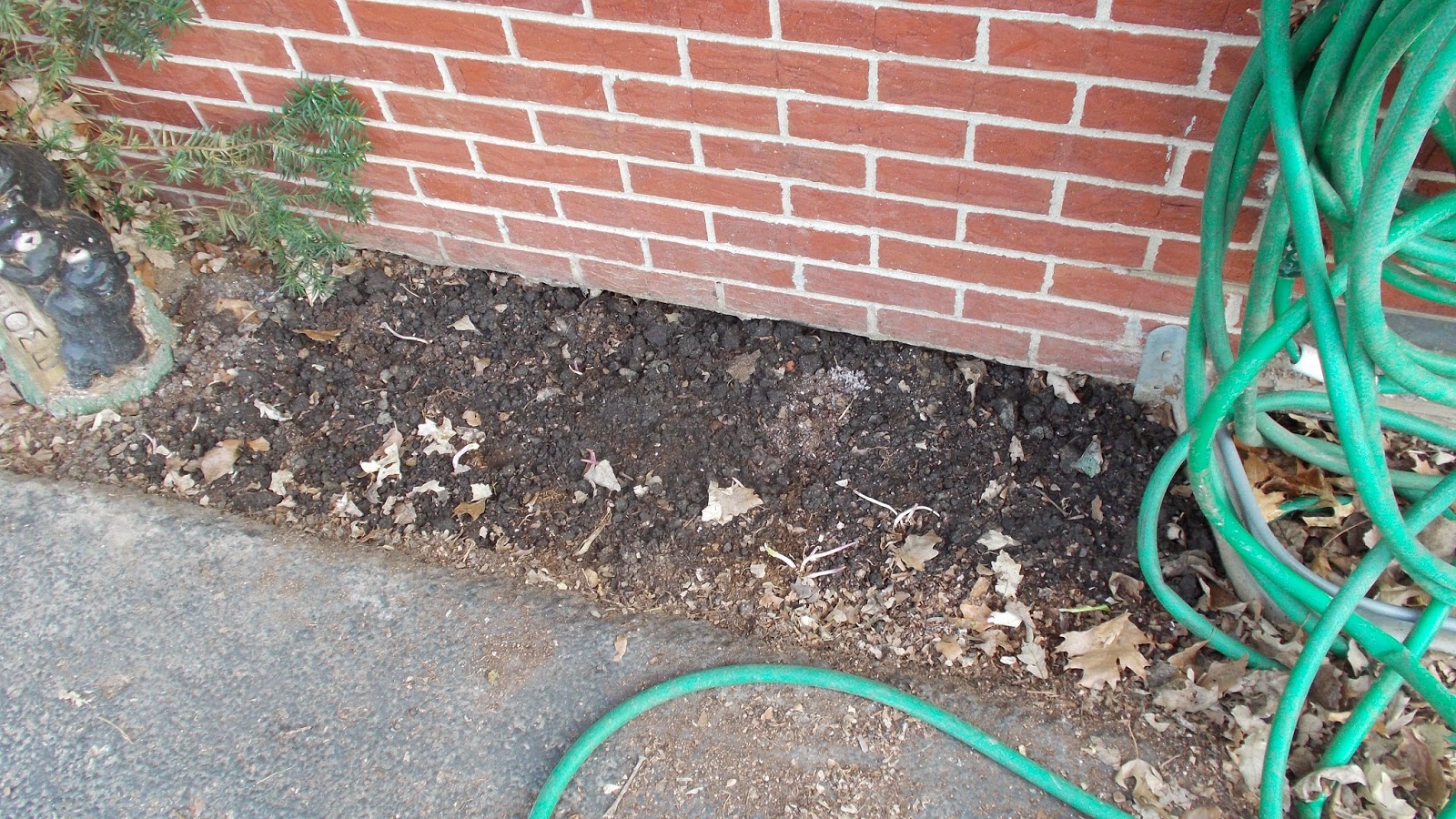 The far end of the 'Bed from Hell' is now mostly under control and I planted some clematis. I will likely plant more bulbs in there this fall. 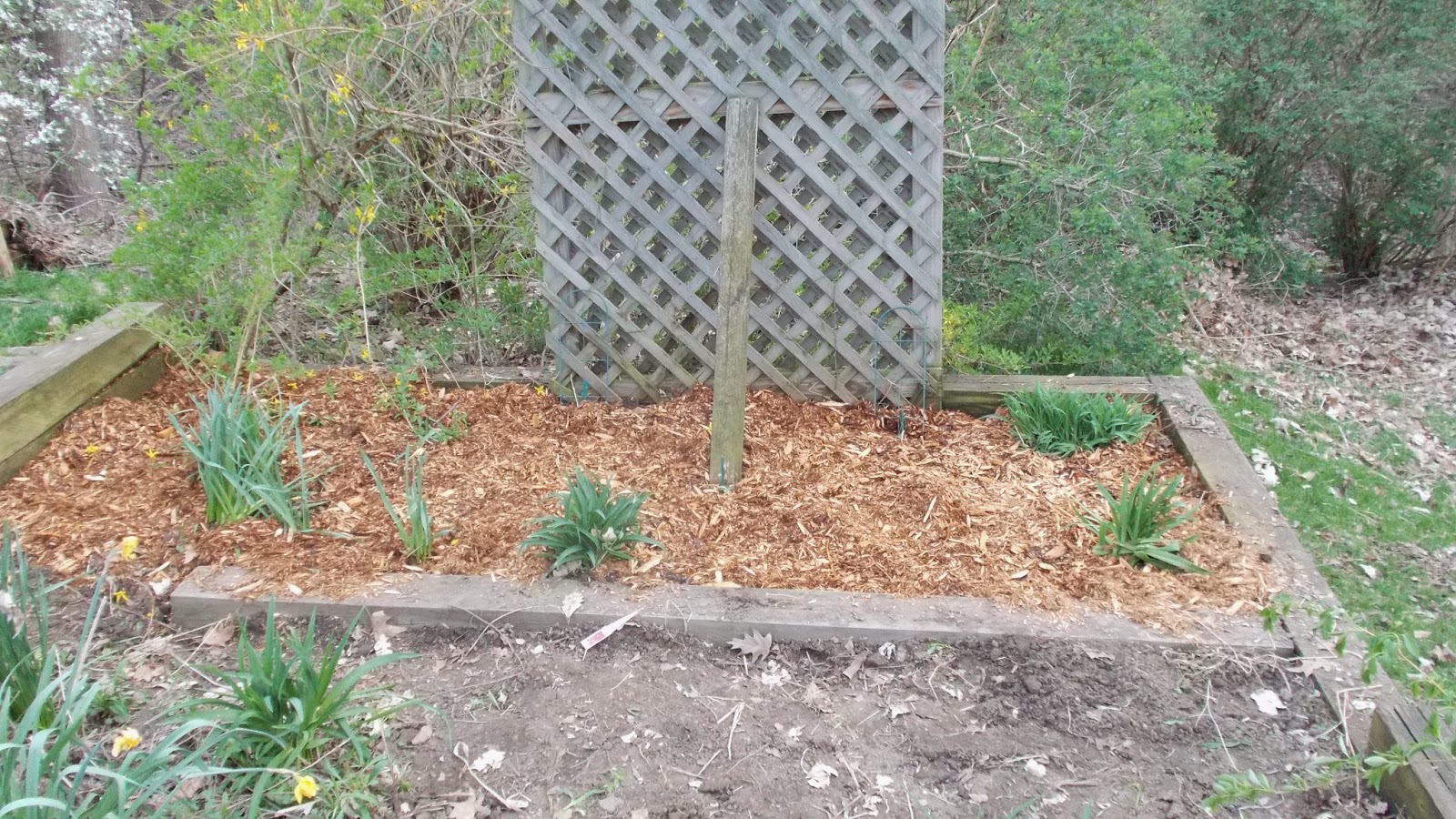 There's plenty more to do... more mulching, more transplanting/moving/removal. Hopefully we'll get the giant bed under good control this year.

As to the Khokhloma, I've been working on a traditional-inspired Russian folk design to paint on the sides of the Red Room. There are still some elements in pencil as I'm still pondering them. Then I need to design one for the top of the roombox as well.

[And because this has become an issue for some people, a gentle reminder that this design is copyright me. Please do not use without written consent. Thank you muchly.] 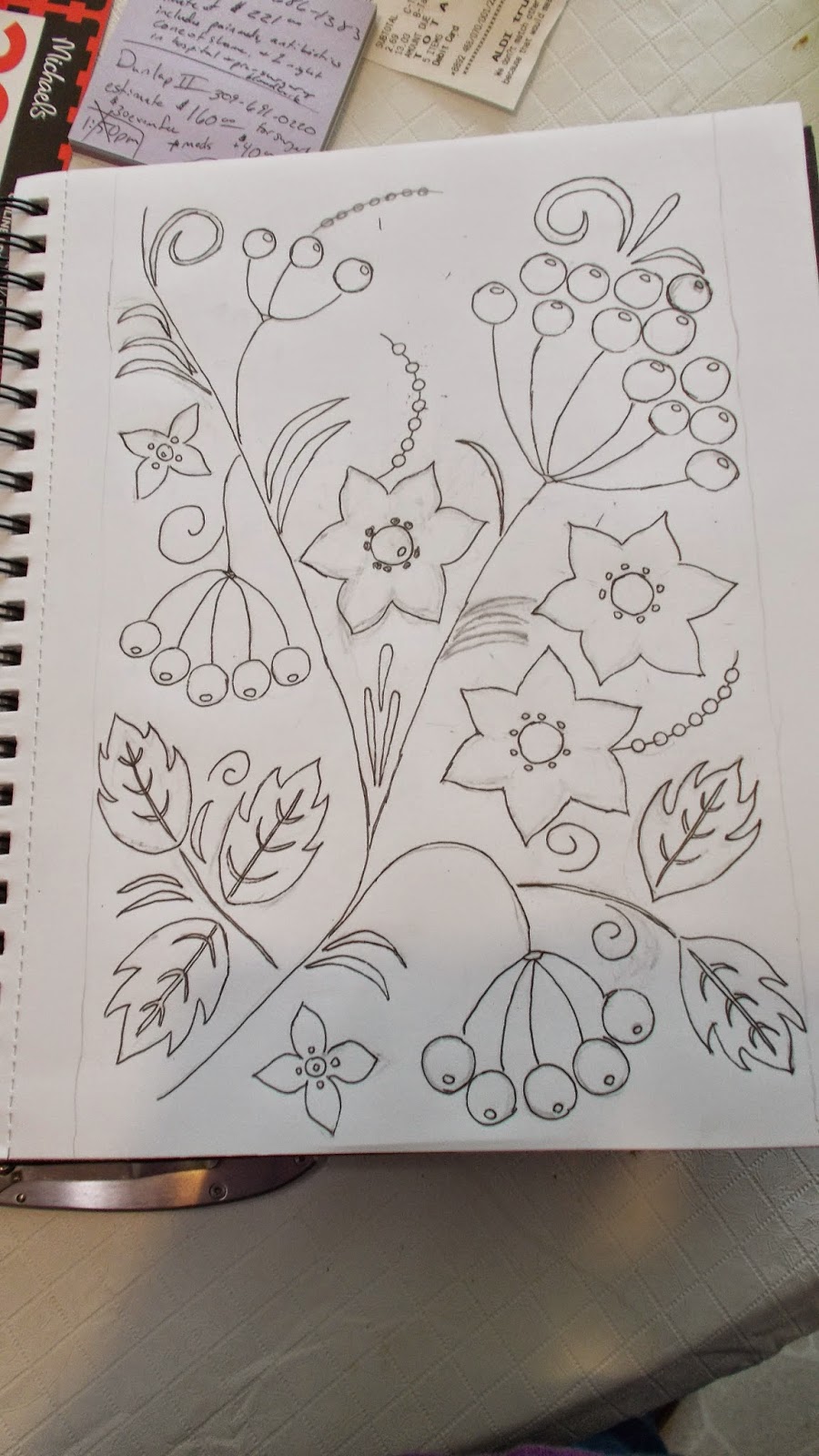 That's all for this week. Time to get back to work!
Posted by MiniKat at 10:35 AM No comments:

Working in the Red Room

Last week I spent a lot of time cleaning and doing things around the house... boring! But I did make some time to start a roombox renovation.

I started with this, an inherited project that someone didn't finish. I love the lighting and the floor, and of course the 1/144 room in the wall... but not much else. 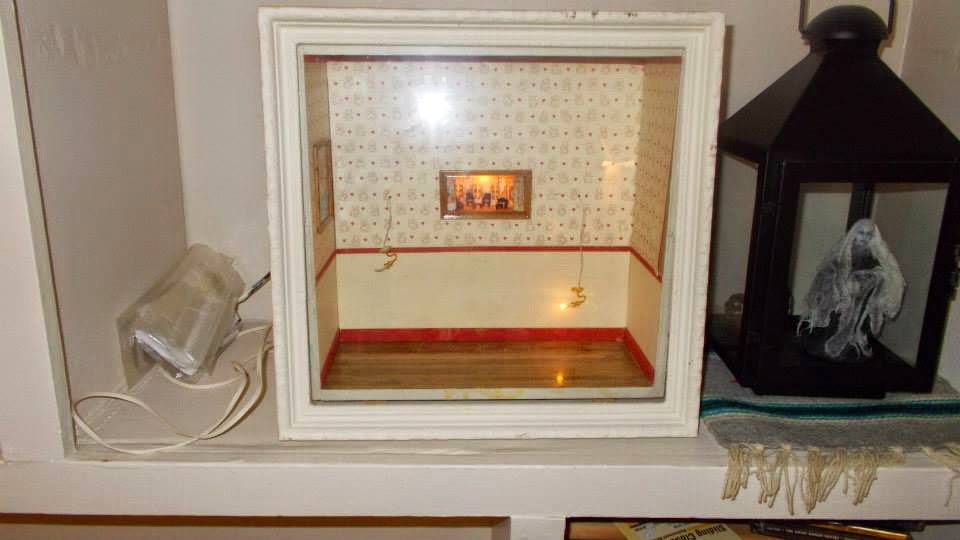 Happily the wallpaper was easy to remove and the electrical wasn't overly complicated to move for the renovation. 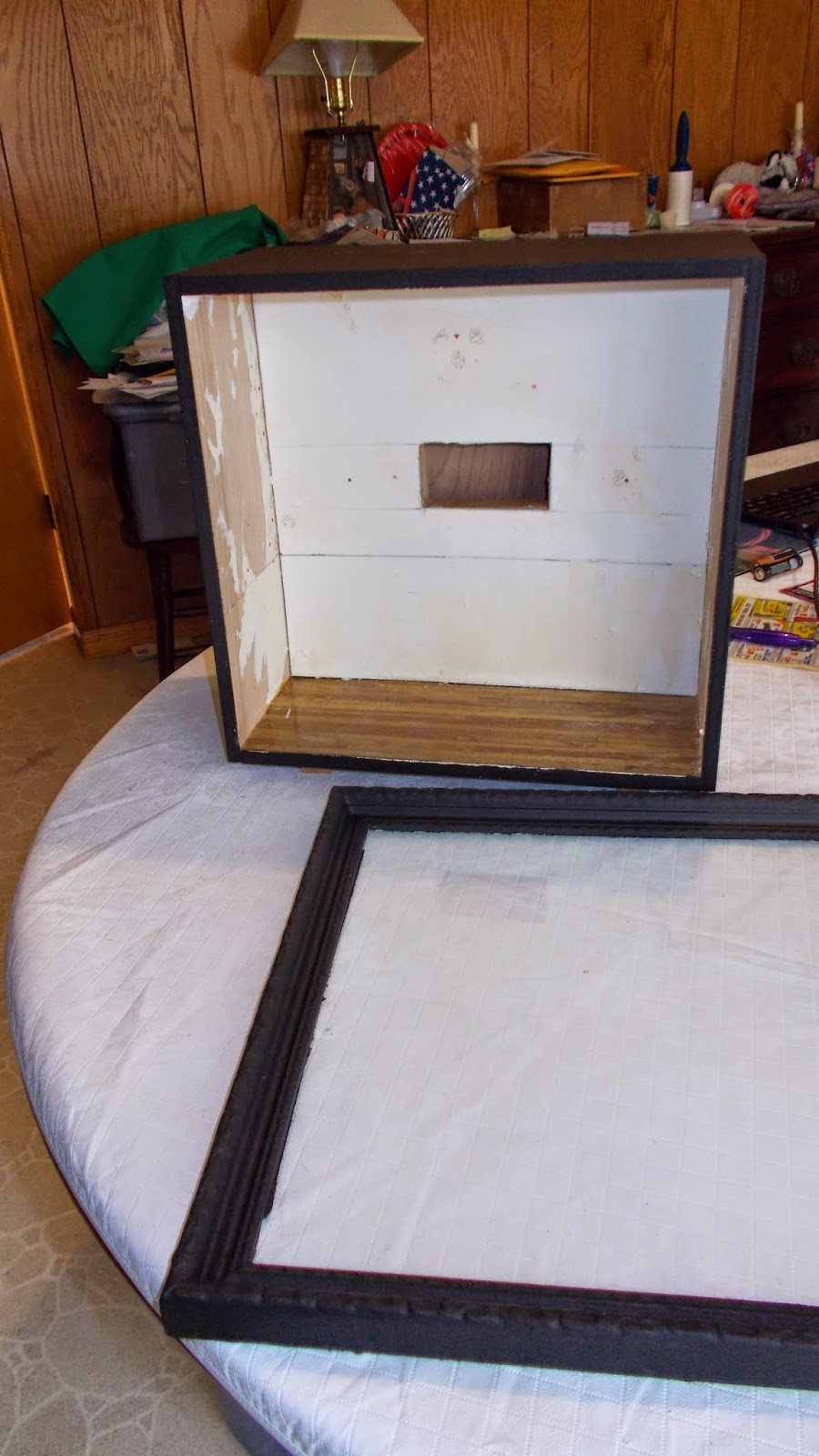 The 1/144 scale room is only temporarily reinstalled. It needs a bit of a makeover as well, but I needed it to help hold the new wallpaper in place while the glue dries. 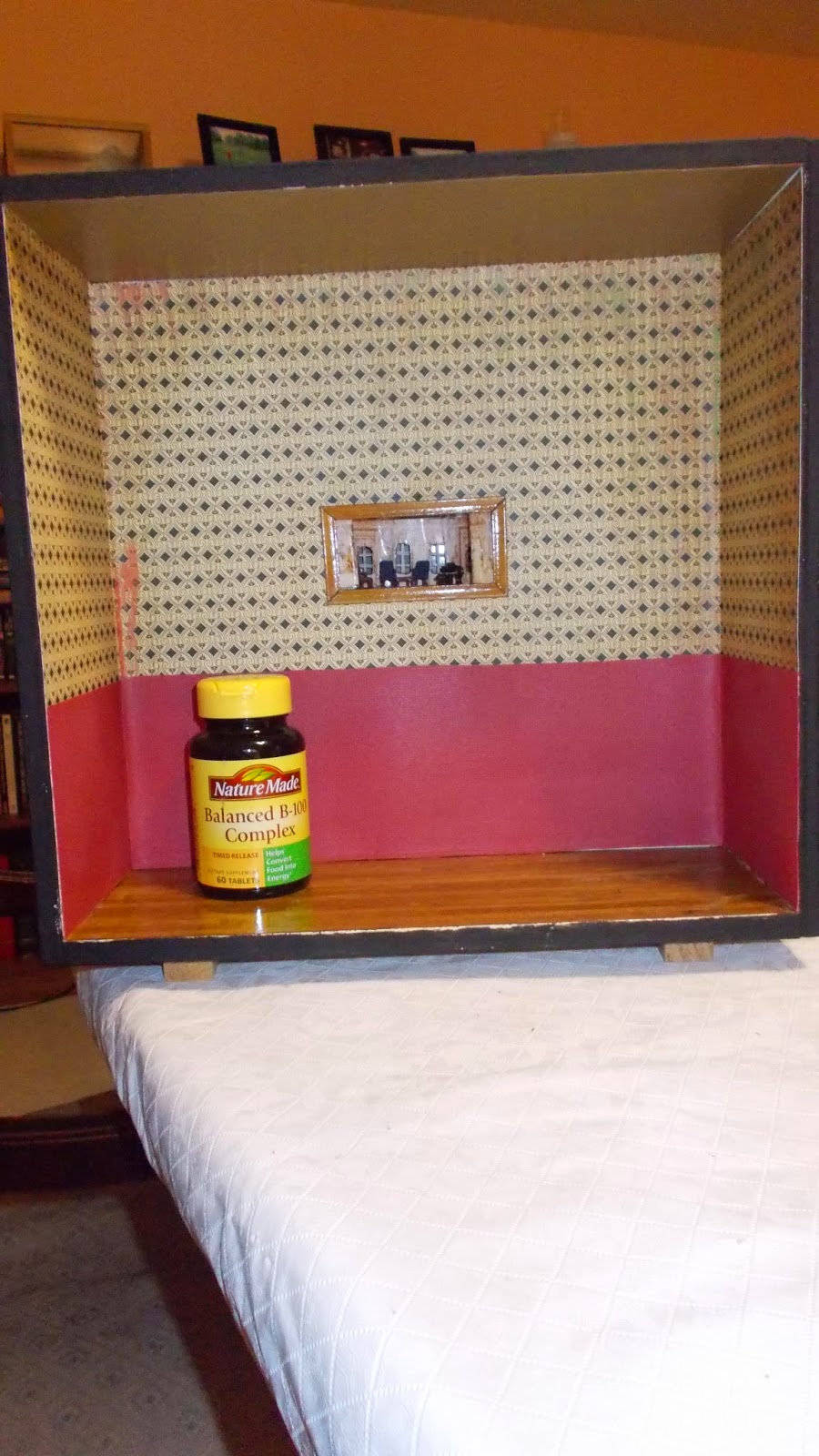 Next up will be cleaning up and painting all the trim pieces and getting them put back in place. Hopefully that will happen in amongst laundry and other chores this week.
Posted by MiniKat at 7:18 PM No comments:

We hope everyone who celebrates Easter had a wonderful day. We sure did! Artie hid, so no pictures of him, but the rest of the critters posed. :-) 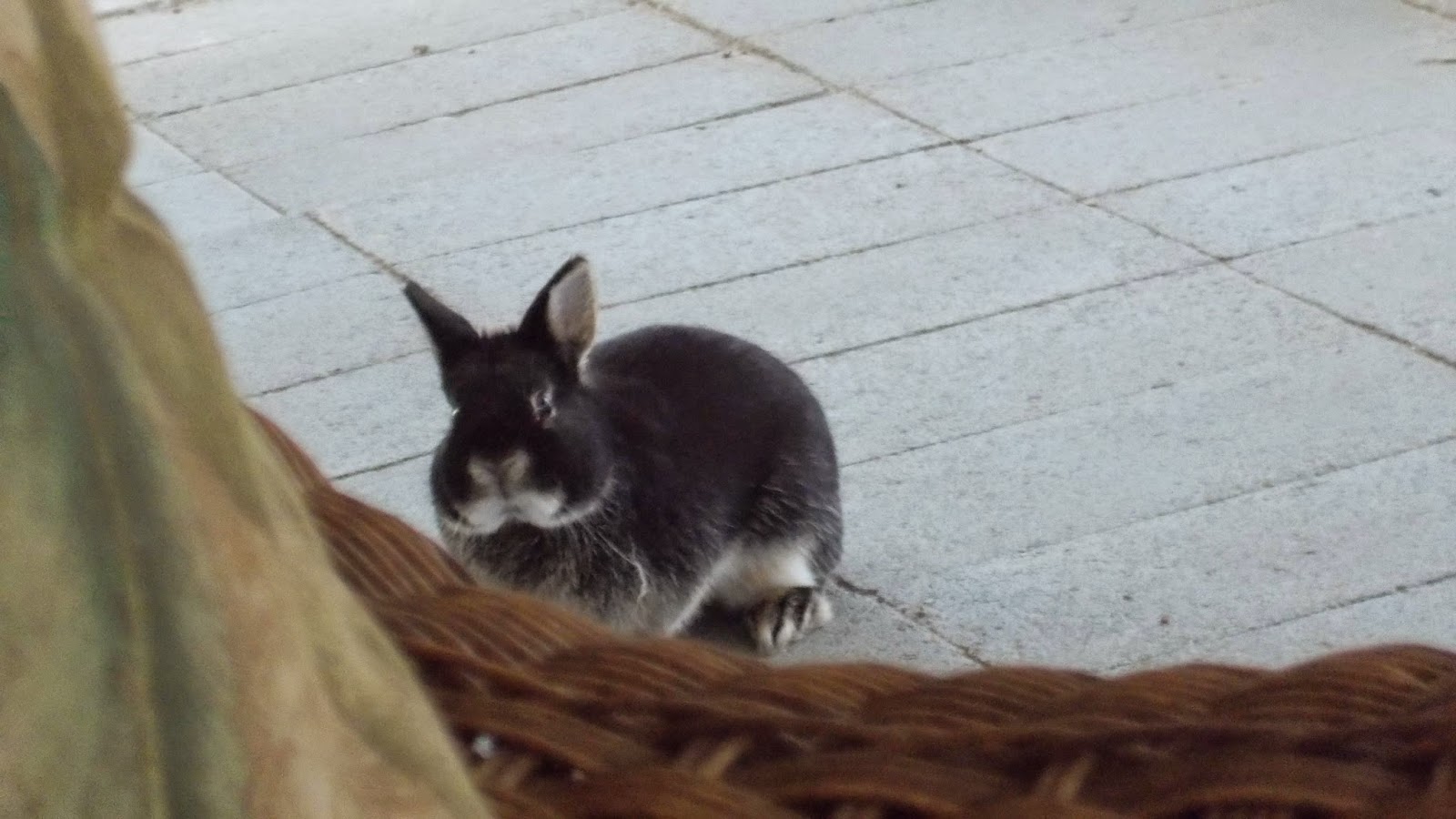 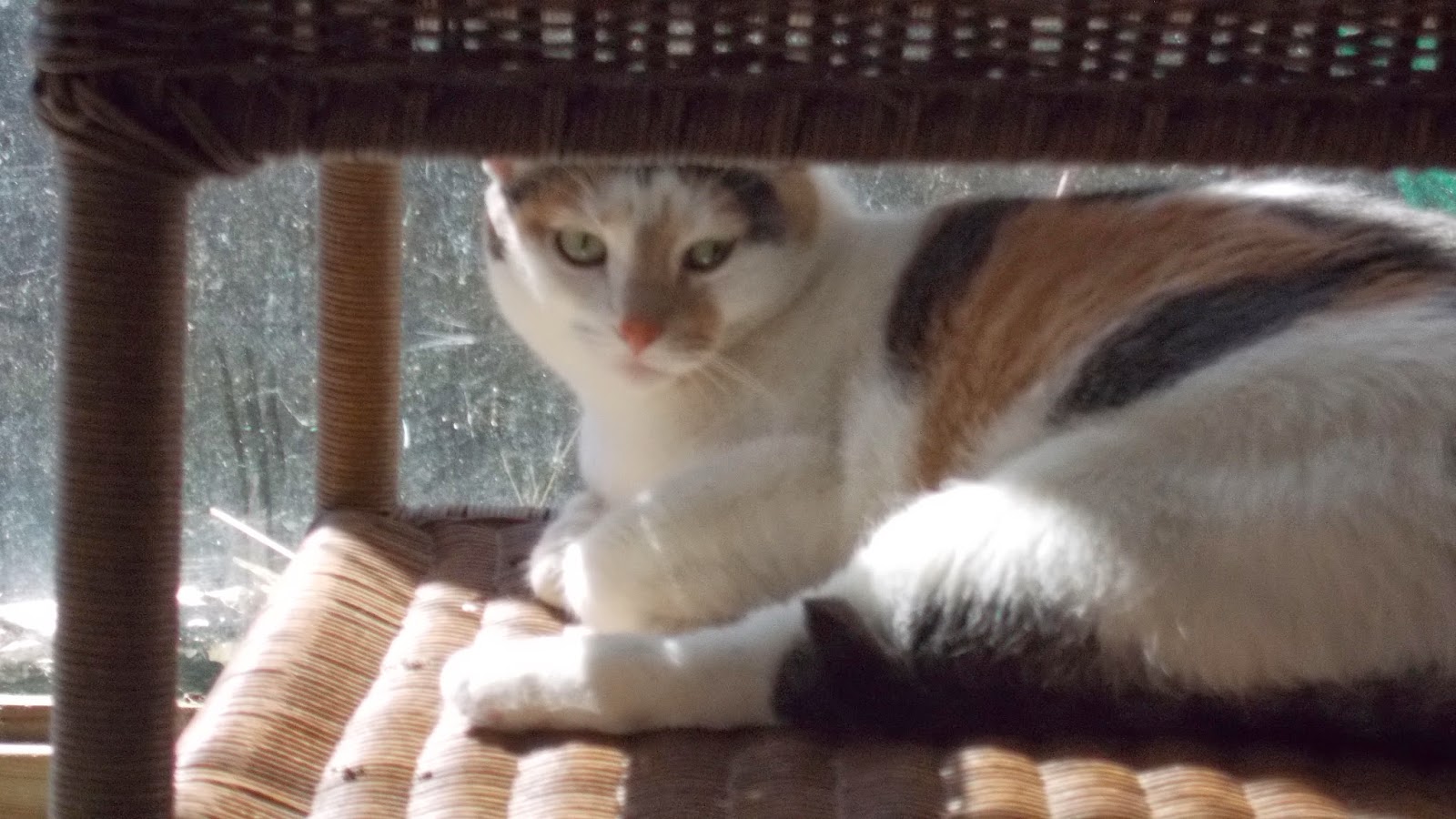 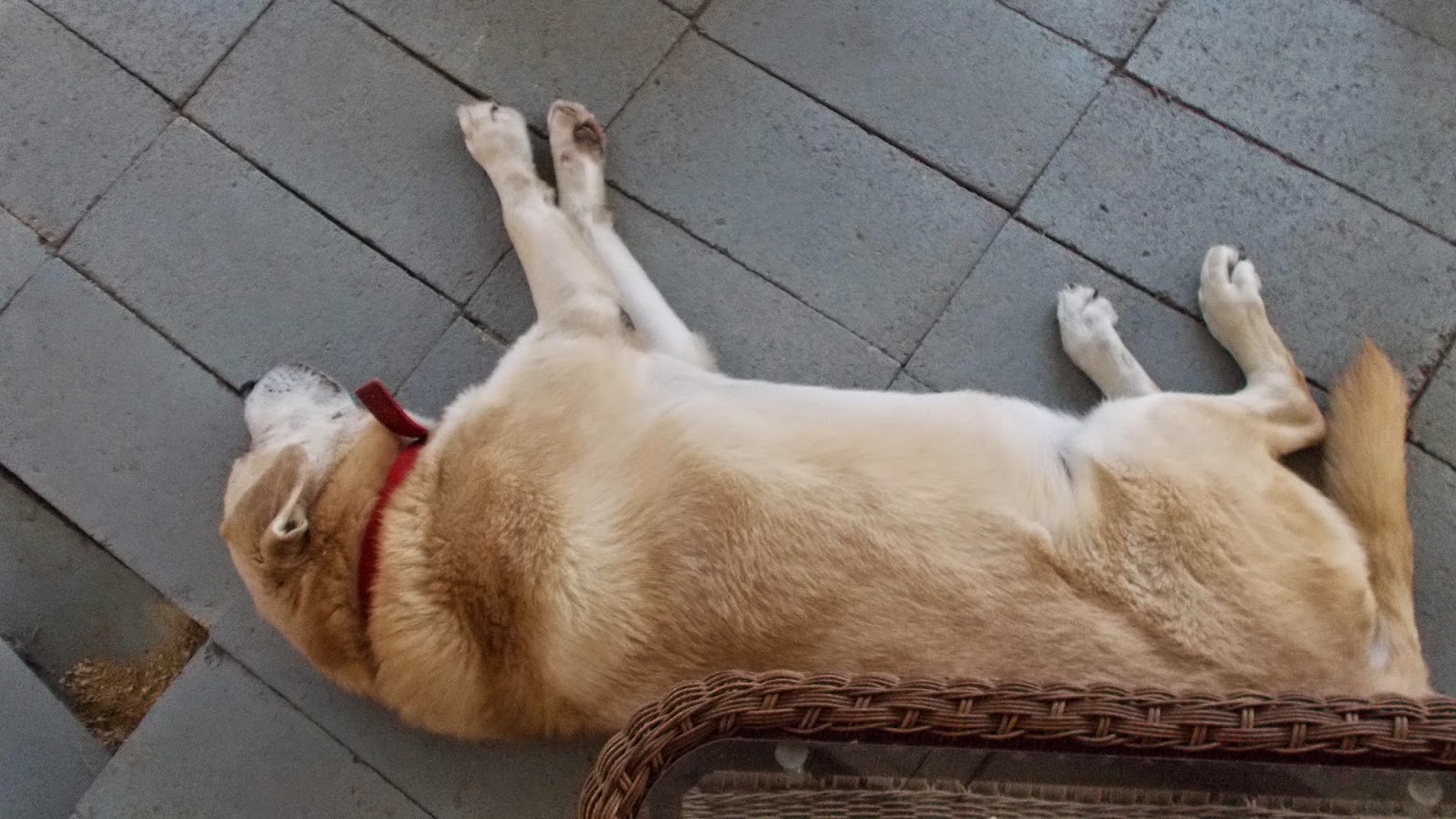 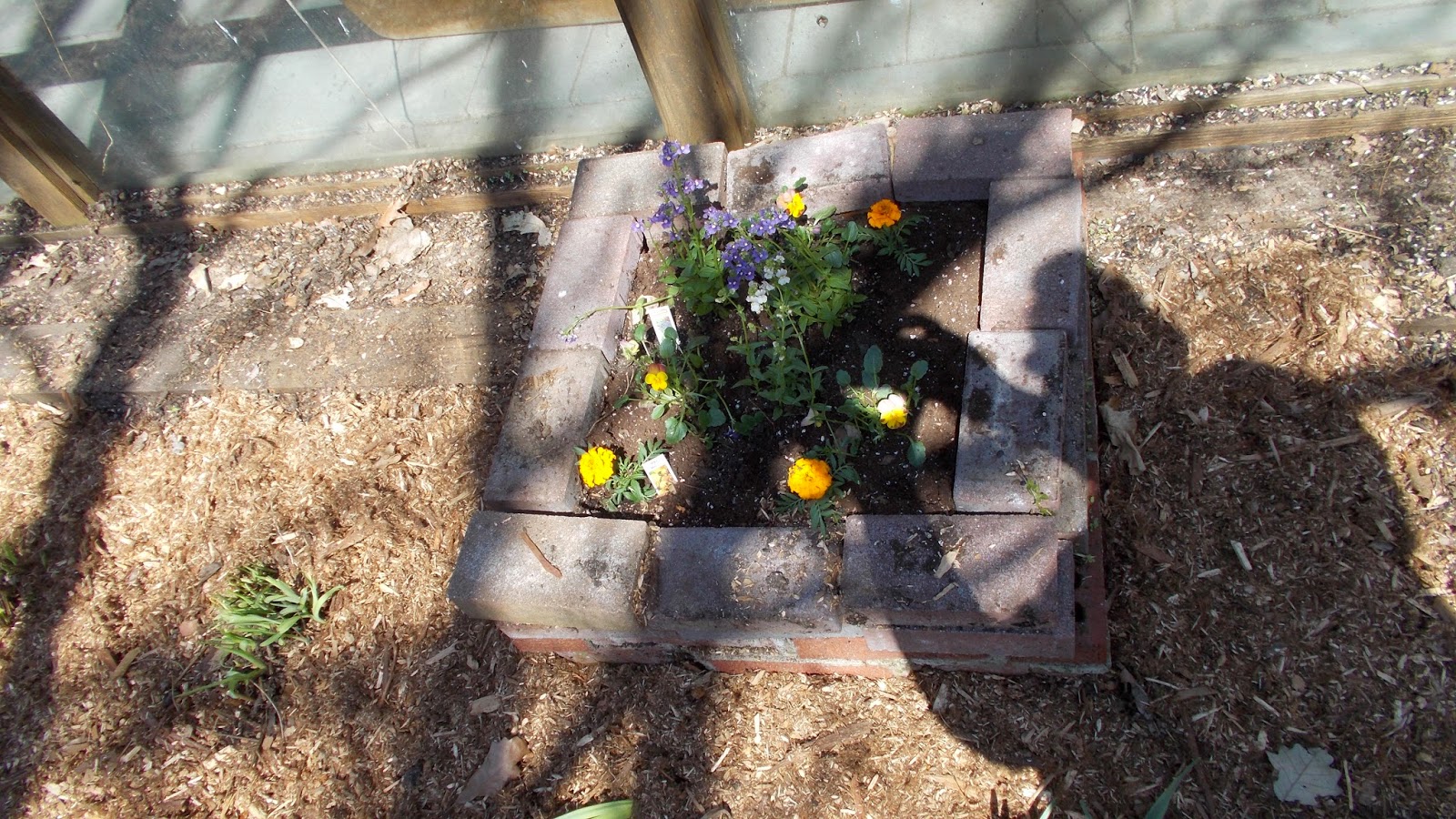 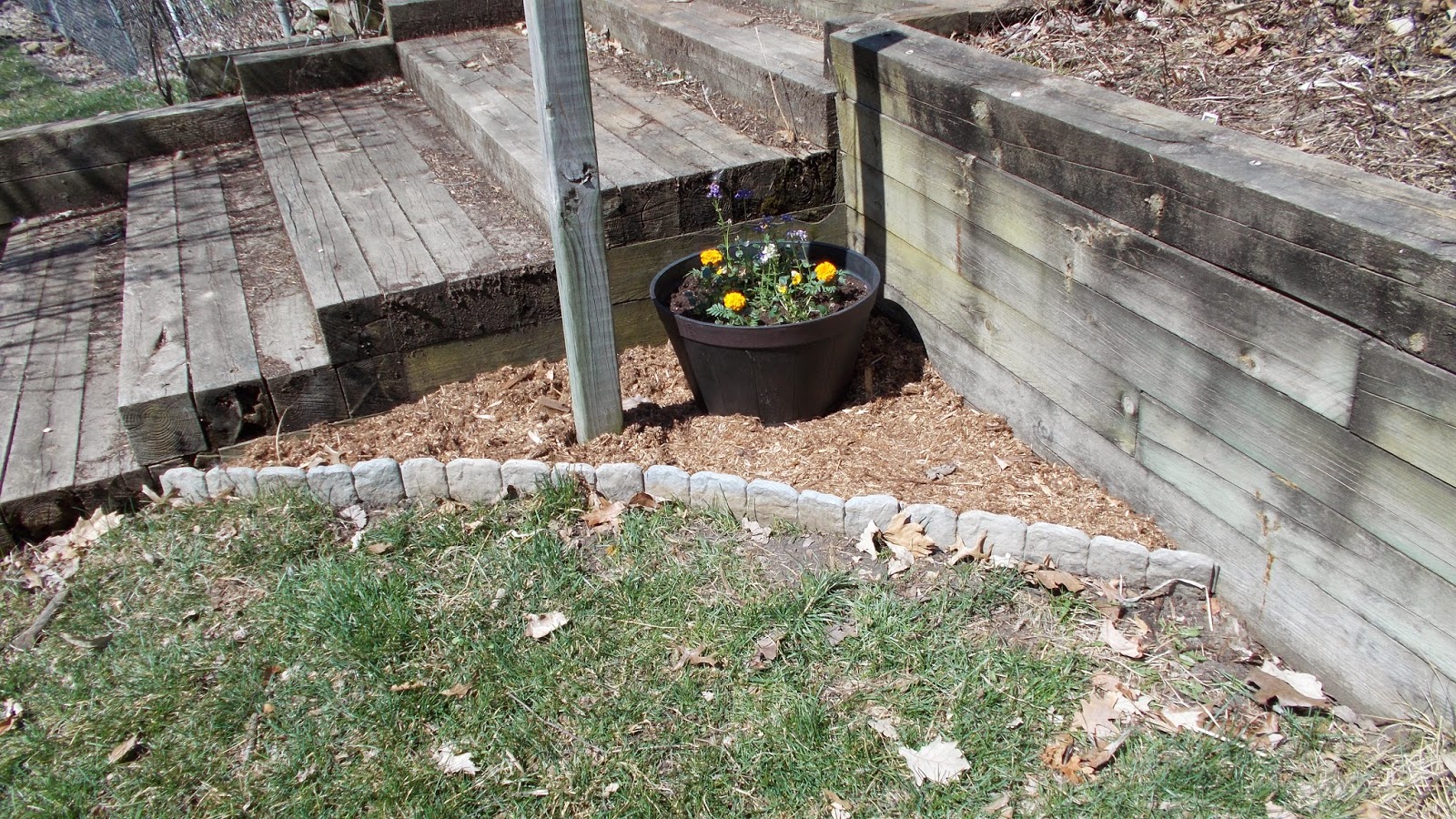